With 30 bamboo containers on his shoulder, May Vuth from Phnom Touch commune in Oudong district, Kampong Speu stares into his plantation, rueing how palm sugar production is a dying industry in Cambodia. It no longer attracts youngsters although it was once the pride of the farming sector in the Kingdom.

With 30 bamboo containers on his shoulder, May Vuth from Phnom Touch commune in Oudong district, Kampong Speu stares into his plantation, rueing how palm sugar production is a dying industry in Cambodia. It no longer attracts youngsters although it was once the pride of the farming sector in the Kingdom.

“Many farmers are giving up this job because it has a low profit margin, dropping resources and shortage of labour. The price of the product is also low while production cost rises every year,” he tells Capital Cambodia.

To be top of that, the industry is affected by logging as farmers clear their land and sell them off for cash as industrialisation inches closer to their villages.

“There are probably about 10 farmers including me left in my village who are still involved in this profession. We are still at it only because we don’t know what else to do as we grow older. The job does not interest young people, so that leaves a majority of us aged between 40 and 60 years continuing this survival trait started by our forefathers,” says 48-year-old Vuth.

In 2010, there were 600,000 palm trees in Oudong and Samrong Torng districts in Kampong Speu province whereas Ang Snuol district, Kandal province registered 400,000 cultivated palm trees. But now, the figure is likely to have fallen as a result of logging, says Sam Saroeun, president of Kampong Speu Palm Sugar Promotion Association (KSPSPA).

“We not only face palm tree logging but also labour shortage, slow industry growth, lack of raw material such as firewood for palm sugar production, and pieces of `popel’ or `koki’ wood used in bampong (bamboo containers) to reduce the fermentation speed of palm sap,” Saroeun adds.

Palm sugar harvesting is done between December and May by farmers, skilled climbers who collect the sap from palm flowers.

“Every day, I wake up at 3am to collect the sap from palm flowers located at the top of the 10 meter-high trees. I climb 40 palm trees twice daily. The job is difficult and dangerous. I have to remind myself to be careful every time I climb because if I fall, I will certainly die,” he says.

Sap-filled containers are collected from the palm tree 15 hours after they are installed on trees, and the sap harvested is poured into bamboo containers before small pieces of popel or koki wood are placed in there. The use of plastic containers is prohibited.

Palm sap processing that starts within two hours of being harvested involves cooking over firewood stoves until the moisture evaporates before the vessels are taken off the fire for the liquid to crystallise and whiten. Traditional tools made of wood or stainless steel such as “antok” and “khno” are used to process the sap. Producers have developed a specific knowledge to cook the sap in order to extract a high-quality sugar, depending on the final product they want to obtain.

Cooking up a sweet deal

Early April, European Union recognised palm sugar production in Kampong Speu as a protected designation of origin and geographical indication (PGI). Kampong Speu palm sugar or ‘skor thnot Kampong Speu’ in Khmer language is the second Cambodian product to earn the distinction in the European bloc after Kampot pepper in 2016.

On its own, the light brown product with a rich aroma, first attained geographical indication status in 2016, after it earned the same distinction in Thailand and Vietnam.

It is hoped that the additional protected designation of origin recognition would save the sector from collapsing while instilling national pride in palm sugar farmers. 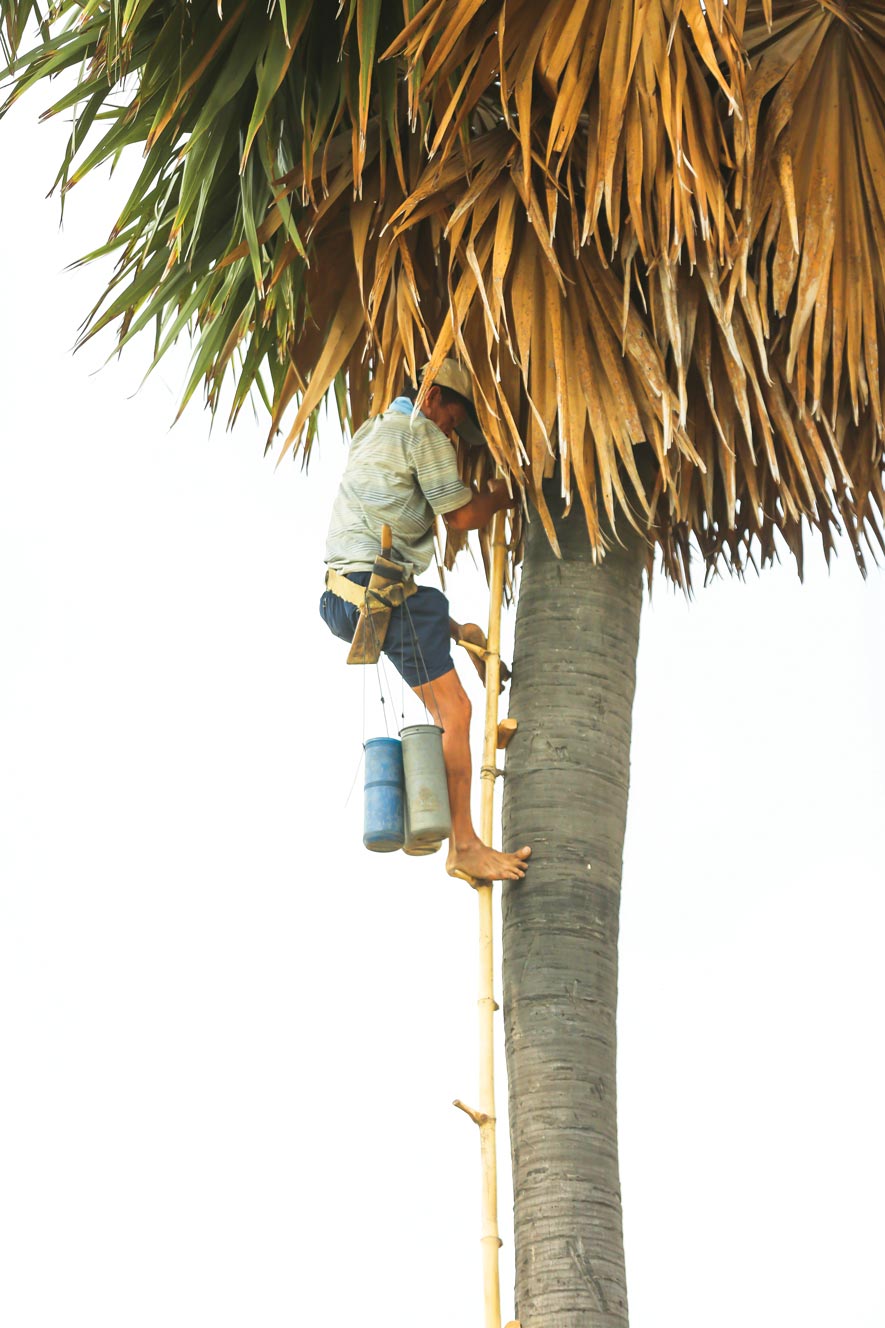 Saroeun says orders are expected to increase as PGI would keep counterfeits at bay and ensure price stability, meaning that farmers will enjoy higher living standards. It also serves to protect the name of the product.

He says it is a culmination of the association’s work with the Cambodian government, particularly the Commerce Ministry.

“Since we have PGI status, we hope to see orders from new markets. Kampong Speu palm sugar is exported to 27 countries in Asia and the EU. (With rising orders) we have to increase production, thus generating more jobs and raising farmers’ incomes,” he states.

The 168-membered association has recorded year-on-year growth in production to 300 tonnes in 2018 from one tonne in 2009. This year, the 11-year-old association expects to produce 350 tonnes of palm sugar.

The association sells palm sugar to processing and exporting companies at approximately $1,350 per tonne.

“Farmers make some profit when companies pay this price but if the price falls below $1.25 per kilogram, they lose out. We believe with higher palm sugar prices than current prices, more farmers would join the industry,” Saroeun explains.

Similarly, Vuth stresses that palm sugar pricing should not be lower than $2.50 per kilogram because only then can it cover the rising production cost from season to season, a stinger that has hurt many farmers over the years.

“Actually I own only 25 palm trees while another 15 trees are rented from other farmers who have given up. I give them five kilogram of palm sugar per season, per palm tree. However, I too will give up when the price goes down or when I get older,” he says.

He tells Capital Cambodia that Confirel exported some 100 tonnes of palm sugar to the EU (mostly France) in 2017, and 150 tonnes in 2018. Its exports also include Korea, Taiwan and Japan.

“The registration of Kampong Speu palm sugar will protect the sector for the EU market. Moreover, it is an international recognition of the palm sugar’s quality which can attract more buyers,” Piseth says.

His company has signed a deal with KSPSPA this year for the purchase of 200 tonnes of palm sugar where 40 percent would be absorbed by the local market and the remainder, exported.

It offers $1.50 per kilogram for the deal but plans to add between 200 riel to 400 riel per kilogram next year to raise farmers’ standard of living. Based on this, farmers would be able to earn from $4,000 to $5,000 per year/per season from January to May.

Meanwhile, Saroeun urges exporters to use the geographical indication brand name when exporting in view of the promotion of Cambodia’s skor thnot Kampong Speu in foreign lands.

“We will also push for higher palm sugar prices so that we can get more farmers onboard. The palm tree is our national identity. Although we cannot ban the logging of palm sugar trees, we will raise the awareness regarding its benefit with farmers. To me, these trees are an important national image to boost the livelihood of rural farmers. As long as I hold this position, I will not let them down,” Saroeun says.

Both the Malaysian and Cambodian governments have signed agreements on tourism cooperation and the avoidance of double taxation and the prevention of fiscal evasion regarding taxes on income.

US President Trump has threatened to impose tariffs on Mexico to put pressure on the country to keep migrants from crossing into the US. Mexico has said the tariffs would only make the migration problem worse.