Several factors will determine whether the population will prosper as hoped

A lot of questions have been raised about how Cambodia can achieve middle-income nation status in 2030 with critics fearing stagnation at the current lower-middle income level in the face of an assortment of global trends.

From the continued rise of China, through the effects of climate change to the transition towards a digitalised global economy, Cambodia is set to develop within a rapidly changing global landscape that offers both new challenges and new opportunities.

In the book predicting the nature of Cambodia in 2040, released by  German political think tank Konrad-Adenauer-Stiftung Cambodia and Future Forum, experts predict that from being largely reliant on agriculture, in 2040 the Cambodian economy will have developed into one that is industry-based; from being labour-intensive and narrow, its economy will be skills-based and diversified. In addition, the population will enjoy higher standards of living and better conditions in smart and green cities, with access to quality healthcare and education systems, inclusive social security, and efficient public services.

Strong political will and bold reform efforts will have been key in effectively addressing structural weaknesses to improve the investment climate, reduce business costs, enhance trade facilitation and address skills shortages. This has provided a good environment for Cambodia to strengthen its competitiveness and attract more quality foreign direct investment for economic diversification, focused on higher value-added goods and services.

Kruy Narin, special appointee at the International Monetary Fund (IMF) and deputy director of the general department of policy at the Ministry of Economy and Finance, wrote in the book Cambodia 2040: Economic Development that the last 20 years of change in the Kingdom have seen Cambodia undergo a considerable economic transition towards the lower middle-income status reached in 2015.

This growth has been primarily driven by large demand in the garments and tourism industries. With an average growth rate of 8  percent between 1998 and 2018, Cambodia is one of the fastest-growing economies in the world.

Kruy said the latest figures at the time of writing show that Cambodia’s international trade reached $24.9 billion in 2019. The kingdom’s three biggest export markets are the United States, the United Kingdom and Germany, while its largest import partners were China, Thailand, and Vietnam in 2019.

“With ambitions to break into the upper middle-income bracket by 2030, the policy recommendations we made in this book seek to support the continued achievement of this goal,” Kruy added.

The poverty rate in Cambodia has continued to fall as economic growth continues to provide an engine for development. With a population sitting just over16  million and, according to official estimates by the World Bank, the poverty rate has fallen from 47.8 percent in 2007 to 13.5 percent.

Beyond Cambodia’s internal status at this time, several prevalent megatrends will determine the future of growth and development within the kingdom. Whereas a trend captures a general direction of change over time, a megatrend captures the major forces in societal development that are predicted to affect all areas over a 10-year timeframe, wrote Kruy.

“At this time, five megatrends have been identified that will shape the development of global society and economy: rapid urbanisation, climate change and resource scarcity, a multipolar structure of global power, population growth and demographic change; and technological breakthroughs,” she added. “Each of these megatrends will have a direct impact on the form and function of Cambodian growth and development.”

This, she argued, has provided a conducive environment for Cambodia to strengthen its competitiveness and attract more quality foreign direct investment for economic diversification, with a focus on higher value-added goods and services.

Complications and costs regarding doing business in Cambodia have been reduced drastically, with investors well informed of the registration processes that turn over in a matter of a few business days.

She wrote that the removal of unnecessary formal and informal fees has substantially reduced the cost burden for investors and, in turn, boosted the competitiveness of local firms so they can provide cheaper products to better compete in both domestic and foreign markets.

“Given strong growth performance, the Royal Government of Cambodia (RGC) has been able to mobilise greater resources from tax collection. Public-Private Partnership (PPP) infrastructure projects have been further expanded, with a robust regulatory framework and the necessary management capacity in place,” Kruy wrote.

“We expect that the book will be of considerable interest across a range of constituencies, from government ministries to NGOs (nongovernmental organisations) to bilateral and multilateral aid agencies and could ultimately help to facilitate greater cooperation among these diverse elements while contributing to resolving the perpetual challenges of aid fragmentation and the absence of coordination among the various stakeholders in Cambodia’s development,” said Ou Virak, founder and president of Future Forum, who commissioned it.

He added it will allow the public to learn about Cambodian history and discuss the present and find solutions for the current issues for the future.

He said Cambodia 2040 portrays the dialogue among stakeholders on current issues. “I can say that the conflict and the prosperity of the past history is our lesson but, regarding policy, we should think about the future and find solutions for future problems,” Ou added.

“We asked the authors to think about the future on the realistic things that Cambodia needs, the people need and what is likely to happen in the future. We looked at two scenarios, which focus on what we want and whether they could possibly happen,” he added.

This extraordinary growth saw Cambodia achieve lower-middle-income status in 2015. Building on this solid performance with the aim of reaching the next level of development, the government has set a target of becoming an upper-middle-income country by 2030, achieving high-income status by 2050, with per capita gross national income of $3,896 and $12,056, respectively, based on the World Bank’s new classification thresholds. People will enjoy enhanced infrastructure with a better education system and improved healthcare services, according to the book.

It says social security will be provided for all, with better integrated and more effective social protection systems in place. Digital adoption will be high in most areas, with people living in smart and green cities.

Mey Kalyan, senior adviser to the Supreme National Economic Council, said that Cambodia is on the right track to reach the high middle-income level in 2030. He added that there should be a common consensus to make the process happen. 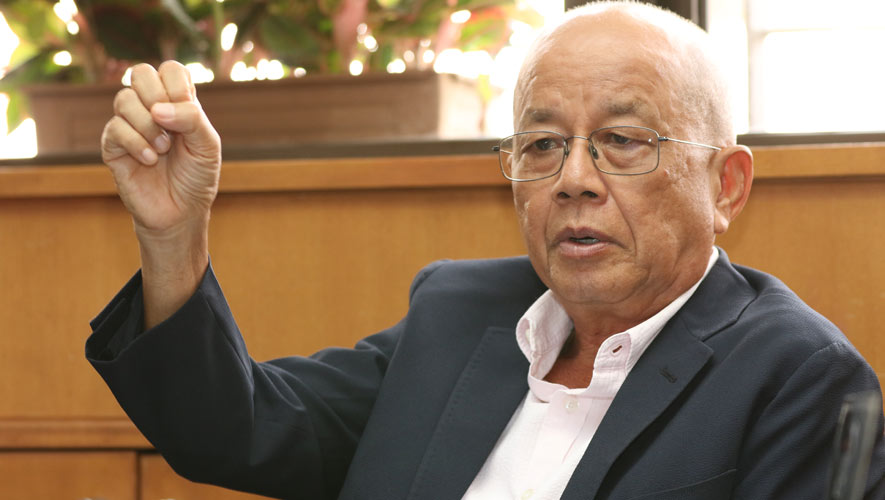 “It is not essential that we have to achieve it by 2030, but if we can achieve it around 80 percent it is also a strong accomplishment. In my view I want all the people to think where we are now. There should be a common consensus and make the process happen,” he added.

“Overall, the government vision to reach middle-income status in 2030 and a high-income country is on the right track,” Mey added. He said the number does not reflect the reality, but there must be support, knowledge, consensus and understanding and teamwork to build the future of Cambodia. The book also mentions that necessary policy steps to ensure attainment of upper-middle income in 2040 require Cambodia to continue building a culture of democracy, underpinned by the necessary institutions and governance mechanisms; ensure a free, fair and multi-party election system with international oversight; promote political equity through a culture of dialogue; continue to ensure freedom of media and freedom of speech within legal frameworks; strengthen the capacity of political institutions, with a clear delegation of tasks within a system of checks and balances; strengthen the capability of officials.

There should be in each institution quality of policy discussion and regularly improvement in the functional roles of the public institutions of government, at both the national and sub-national levels. The government aims to have developed effective and transparent political institutions by 2030 and have in place robust, transparent and accountable public institutions.  The government needs to ensure that it will establish suitable incentive mechanisms for public institutions, continue a campaign against corruption by promoting a culture of intolerance of all forms of fraudulent conduct; continue promoting public administration reforms toward the establishment of a performance-based system; enhance professionalism in the provision of public services and continue democratic reforms at the sub-national level through promoting accessible public services close to communities.

The book says fostering a climate of rule of law, especially regarding public order and criminal, civil, and business law based on regional standards, needs to be strengthened by 2030, with judicial system standards in line with international practices covering the entire legal framework developed by 2040. To this end the government can continue formulating laws and regulations with suitability, consistency and enforceability by strengthen the capacity of law enforcement officers through promoting skills and integrity, improving accessibility to legal services, especially for the poor; and promoting specialisation in the provision of legal services, with a focus on quality and the eradication of corruption in the judicial system.

To become an upper-middle income country by 2030 and achieve high-income status by 2050, the government will need to have pushed forward the necessary structural and governance reforms to maintain robust sustainable growth in the long term, with economic resilience against domestic and external risks and uncertainties.

“By 2040, the country’s economic outlook could be significantly worse off without the implementation of major reforms. Cambodia could remain a lower-middle-income country or even return to low-income status if the economic base has not been substantially broadened and diversified,” the book says.

Cambodian investment must  increase to 33 percent of gross domestic product (GDP), from the level of 22 percent of GDP in 2017, and savings need to reach 28 percent of GDP from 13 percent for the kingdom to reach high-income status by 2050.

Top 10 reasons to own a condo in Cambodia

China and the United States are expected to come to an agreement soon over trade frictions, analysts said, as the negotiating teams are reported to be discussing the wording of an accord and considering applying the brakes to their tariff standoff.

The rising optimistic mood is relaxing Chinese economists’ furrowed brows, as they believe the world’s second-largest economy will bounce back in the second half, driven by the latest policy package.