Rubber plantations have had a rich history in Cambodia since the first trees were planted by the French protectorate in the Preah Sihanouk province in 1910.

Rubber plantations have had a rich history in Cambodia since the first trees were planted by the French protectorate in the Preah Sihanouk province in 1910. Spreading further inland to Kampong Cham province where the region’s rusty-coloured soil is also perfectly suited to rubber tree plantations, this remains the epicentre of the plantations in the Kingdom today.

100 years later in 2010 and rubber tree plantations were considered one of the best agricultural investments that could be made, with natural rubber prices fetching around $5,000 a tonne during its peak as demand outstripped supply off the back of strong orders from Chinese tyre manufacturers and other Chinese rubber products.

Many landowners and economic land concession holders were sold on the basis of this price remaining stable and looking to cash in on the trees’ relatively short maturity period – six to seven years – and a perceived steady income for the life of a plantation of approximately 25 years. 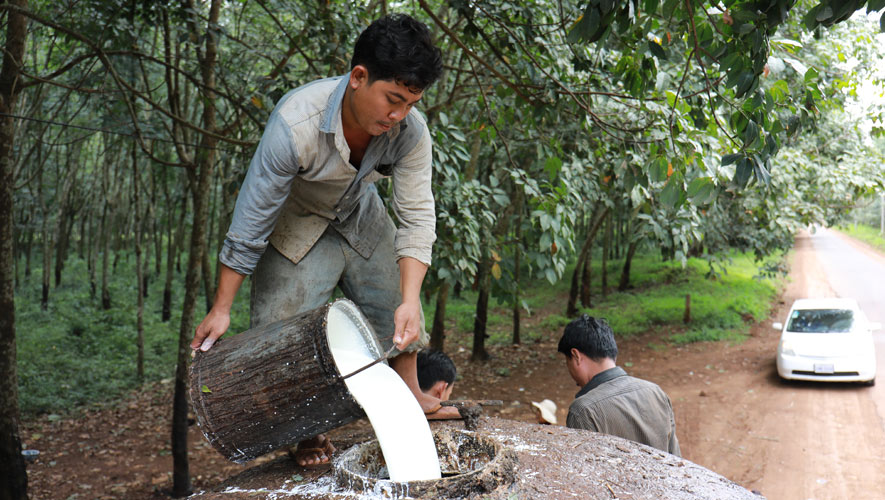 Lim Heng, vice-president of An Mady Group, a major local rubber exporter, said, “This is not just an issue in Cambodia. Low prices are also affecting rubber markets in Malaysia and Thailand, some of the largest rubber suppliers in the world.”

He stressed, the tit-for-trade trade war between China and the United States is a major factor in keeping the commodity prices low. “The industry will most likely continue to face challenges with the uncertainty of global economic growth, ongoing trade wars and now a global health epidemic.”

This market volatility has resulted in a massive impact on the country’s producers, largely because supply is reliant on an uncoordinated network of smallholders that react to price signalling and have business models based upon 2010 or 2017 market prices because many farmers are now stating prices are too low to even cover harvesting and transportation costs.

“Currently, the commodity is selling at around $1,300 per tonne and, at these prices, many local rubber plantations simply won’t be able to survive. The cost of production is currently higher than the price at which the product is being traded. The price needs to be trading at around $1,500 per tonne before businesses can see a profit,” Lim added.
In response, last year the Minister of Agriculture Veng Sakhon submitted a proposal to Prime Minister Hun Sen that natural rubber exports valued at less than $2,000 per tonne should not be taxed. Previous government levies had exports priced between $1,000 and $2,000 taxed at $50 per tonne and $100 when exceeding $2,000 per tonne, in a move to appease entrepreneurs in the rubber industry, who for years have demanded that the government reduce taxes to bring down production costs. 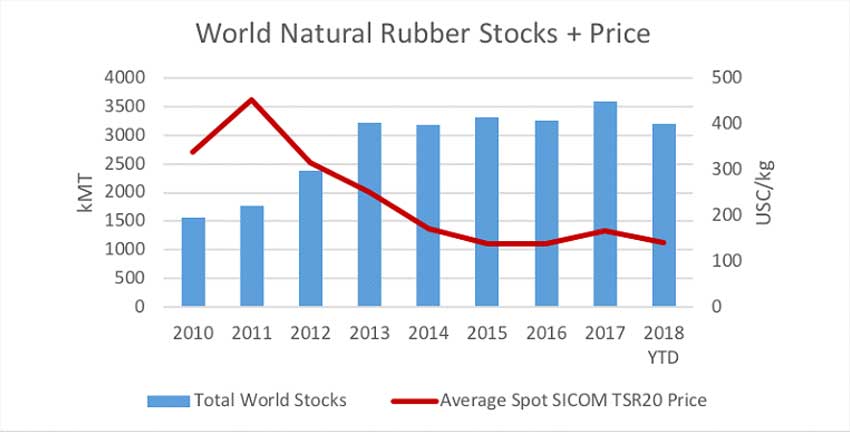 While any move to reduce export tax was, of course, met with praise as Lim stated, he applauded the newly adjusted tax rates, saying, the adjustment will help ease the costs. Although simple mathematics state if prices remain below the $1,500 a tonne market price that procurers state they need to cover costs, a $50 a tonne in savings will not be enough to ensure farmers do not revert back to price signalling and start replanting this crop with another crop that is currently more economically viable.

This is already occurring, with many farmers now looking to Cambodia’s cashew nut market. With exports now at 202,318 tonnes of the nut in 2019, up nearly 100 percent from 101,973 tonnes in 2018, according to data from the Ministry of Agriculture, Forestry and Fisheries. According, to the Ministry of Agriculture, more than 500,000 hectares of cashew nut trees are planned for planting, up from the current 150,000 hectares because current price are strong with raw cashew nuts at $1.25 to $1.50 per kilogramme, depending on the quality of the nut.

Capital Cambodia reached out to the Ministry of Agriculture to ask about the recent amendments and farmers replanting different crops and was advised by Srey Vuthy, spokesperson for the ministry, that the “government and agreed to the ministry’s request” and would not intervene in the choice of business for what crops they want to plant, stating, “diversification is implemented based on the market required”.

Looking to another natural rubber-producing nation, Thailand, its natural rubber sector has been undergoing serious hardship recently, also being affected by the global high supply and low demand but also a surging baht currency that has created headaches for the world’s top producer and exporter of natural rubber, accounting for up to 40 percent of global supply.

In response the Thai Government, has taken an interventionist market approach, approving a 20-year plan to slash rubber plantations by 21 percent nationwide and increase the value of rubber exports by more than threefold, in a move to prop up prices and stabilise farmers’ incomes, said the Thai deputy government spokeswoman Rachada Dhnadirek.

That said, as the current COVID-19 economic crisis deepens and with planned border closures between Vietnam and Cambodia beginning to take effect, natural rubber plantation farmers are approaching their most testing time yet, putting Cambodia’s 282,071 tonnes of yearly dry rubber and the Cambodian tax departments $377 million in revenue from exports to mainly Vietnam, Malaysia Singapore and China under potentially complete lockdown.

In summary, the Cambodian Government and the Ministry of Agriculture need to be careful because if the country’s natural rubber market response to the COVID-19 pandemic is handled under the current “diversification is implemented based on the market required” method, the Kingdom may watch as 110 years of rubber tree plantations are left to rot.

In 1993, US architect Peter Calthorpe first introduced the concept of transit-oriented development (TOD) in his book The Next American Metropolis: Ecology, Community, and the American Dream.

The Mekong River or “mother of the water” is a transboundary river in Southeast Asia connecting China from its origin in the Tibetan highlands to Cambodia and Vietnam, where it flows into a delta.