Mangoes could be one of the main agricultural products from Cambodia to be exported to foreign markets, providing high hopes for their current untapped farming potential, the government says, adding the sector is  ready for new investment.

There is big scope because there are more than 100,000 hectares of land planted with the sweet, juicy fruit, which translates to at least 1 million tonnes harvested each season.

However, only a small percentage is currently exported because of poor facilities and technical knowhow for planting the trees.

The government, through the Ministry of Agriculture, Forestry, and Fisheries (MAFF), said that mangoes have the potential to reach out to more markets on a large scale if investment is injected to build sterilisation facilities and processing factories.

Ngin Chhay, director general of the general directorate of agriculture at MAFF, said that mangoes will become one of the main agricultural products for export as the government works to explore the world’s second largest economy, China, as an export venue.

Chinese mangoes are of much poorer quality than those available in Cambodia and less sweet.

The process of approving shipments of Cambodian mangoes to the Chinese market is ongoing, with a delegation of Chinese officials recently visiting mango farms in the Kingdom to conduct inspections.

“New inspections will be carried out soon by Chinese officials,” Chhay said.

“We are prepared and have been working to improve the issues that were highlighted during their first visit.”

Chhay said Cambodia needs investments on building sterilisation facilities which are the main methods to keep the fruits clear of diseases by use of sanitary and phytosanitary conditions before exporting them to China,               South Korea and Japan.

“The private sector suggests that if we are permitted to export fresh mangoes to China, they will build a factory in the country,” Chhay said.

“I have made visits to China and South Korea. Both of them intend to open sterilising factories in Cambodia,” he added.

“Many other companies, such as Prince Bank, say if we reach agreement with China to export mangoes, they will also establish the facilities.”

The  Chinese company   Bamin, which specialises in growing and exporting mangoes in China, says it has the capacity to sterilise 500 tonnes of mangoes per day while Prince promises at least 500 tonnes to 1,000 tonnes per day, Chhay said.

“Many other Chinese companies from Hunan and Hainan provinces intend to invest in building sterilisation factories in Cambodia for the export of mangoes to China,” he said.

“We hope private investment companies will build the sterilising factories, with a capacity of about 1,000 tonnes to 2,000 tonnes per day for export,” he added.

Chhay said Chinese experts will come to conduct inspection visits to mango farms in Cambodia before giving the green light to Cambodia to export the fruit to China.

“China has finished its inspections already and said that Cambodia’s mangoes are good quality, but some issues such as sanitation and the use of agriculture fertilisers are below their standards,” said Chhay.

“China said mangoes from Cambodia can be exported to China after a final inspection is made showing positive improvements in what was recommended.”

Last year, Cambodia exported about 50,000 tonnes of fresh mangoes to foreign markets, most of them shipped to Thailand and Vietnam.

South Korea will become a new market for mangoes by early next year, while the exporting company is working to progress the business as fast as it can.

The exports were agreed after the two countries worked together after a memorandum of understanding was signed in 2015 for the export of mangoes to South Korea.

Hyundai Agro (Cambodia) Co Ltd will carry out the shipments from January, which were made possible after the formal agreement. 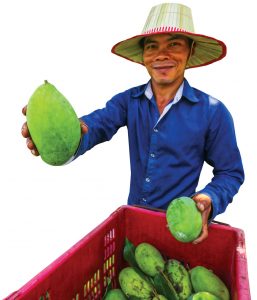 The company has a sterilisation factory with a capacity of 40 to 50 tonnes per day located in Kampong Speu province.

Currently, the company has agreed deals for contract farming organisations to buy mangoes from nearby farms to supply to the factory for export.

The company is not struggling to enter the market, he said, adding that luckily the Korean market has big expectations for  Keo Romeat, a popular mango variety from Cambodia, so the company has had very good responses to offers to supply to big supermarket chains, Lee said.

“Korea is a premium market, so we need to send high quality sanitary-treated mangoes there,” he added.

“First impressions are very important. If we move too fast, customers in Korea may get mangoes of low quality. They then may start to think Cambodia’s mangoes are not good. So we have to specially grade them so our mangoes enter the market smoothly. “That is why we will wait until January so we can get good quality, high-volume mangoes.”

Chhay says Cambodia needs sterilisation facilities capable of dealing with four to five  tonnes per day during the harvest season, which normally runs from October through to the month of April.

The more than 100,000 hectares of land planted with mango trees in Cambodia are mostly in Kampong Speu, Kampot, Battambang and Banteay Meanchey provinces.

In Chayvan, president of the Kampong Speu Mango Association, said Cambodia generally exports the fruit in its raw form because there are no facilities in the Kingdom to process it, such as canning factories.

“We lack packaging and processing facilities, so farmers have to sell their mangoes to traders who export them to neighbouring countries,” Chayvan said.

“We cherish our hopes that the future of our mango industry is guaranteed. The market will be able to absorb our mango products without causing us worries over a plummet in price during the harvest season. This is just our hopes, and there is not any planning yet, but we have received promises from many investors.”

Asked if the government would provide emergency funding to mango exporters for installing facilities, government spokesman Phay Siphan said it is considering help through providing money for installing sterilisation facilities for mangoes much as it has  done with the rice sector.

In sickness and in debt: Medical expenses linked to informal borrowing

Since the term “unicorn” was first used by venture capitalist Aileen Lee six years ago to describe a privately held startups valued at $1 billion or more, the number of companies matching this label has mushroomed to 326, according to a report.