At present, the fastest growing jobs are in semi-skilled occupations such as construction and manufacturing (especially garments) and in semi-skilled white-collar jobs, according to a World Bank report : Cambodia’s Future Jobs: Linking to the Economy of Tomorrow.

More than 66 percent of jobs are in agriculture, forestry, fisheries or occupations that require little in the way of education, such as security guards, office cleaners and tuktuk drivers.

In contrast, fewer than 5 percent of jobs are high-value managers, professionals, technicians and associated professionals.

The two largest cities of Phnom Penh and Siem Reap, international gateway cities such as the seaside town of Sihanoukville, the Cambodia- Vietnam and Cambodia-Thailand economic corridors of Bavet and Poi Pet have also been experiencing construction booms. 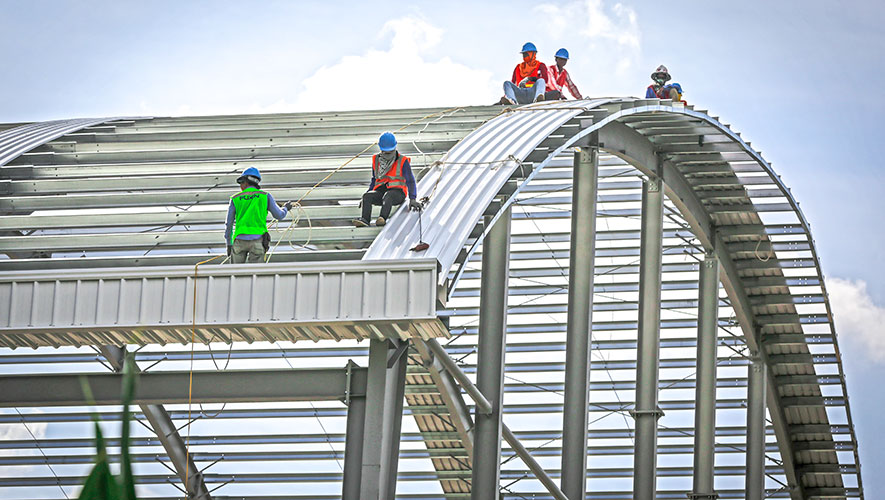 The most rapid increase in construction activity has been in the provincial capital Sihanoukville which received $1billion of approved building projects during the first six months of 2019, compared with $1.08 billion in investment for the entire year of 2018.

As a result, Sihanoukville is being transformed into an industrial boomtown with bustling investment, trade and tourism activities, supported by a nearby international airport and the country’s largest seaport. An expressway linking it to the capital city of Phnom Penh is under construction.

At present, it is difficult to find skilled labour in the construction sector mostly for interior decoration, interior design and carpentry. In addtion to that, local labour knowledge on interior decor is limited, says Chief Executive Officer (CEO) of Diamond Island Development Co Ltd Chin Hok.

“If the jobs are simple, it is not an issue, but when it comes to complicated and creative jobs such as decor, furniture and wood decoration, local labourers have limited skills compared with the Chinese and other foreign workers,” Chin adds.

He says there is no widespread vocational training in these skills but mostly these kind of jobs such as design are done by foreigners.

Chin acknowledges that there is a shortage of construction workers now since the construction began booming and wages became competitive. He adds that under his company, there are around 600 staff and workers. “Mostly, in our project the unskilled labour get more than $5.50 per day, while, skilled labour is from $8 to $12 per day,” he adds.

Kim Veara, an economics lecturer at the faculty of development studies, Royal University of Phnom Penh, says that mostly the construction workers are working under the sun, so that the people, especially youths, are deterred from working in this business. At the same time, he says, there are not enough promotion opportunities or advantages from training in the short and medium term.

“In the construction sector, all skills are needed. It starts with construction engineering, vocational skills in construction, light decoration, decor, electrical work and plumbing. However, youths are unaware of this or they do not want to spend haft a year or one year to study a specialisation,” Kim adds. 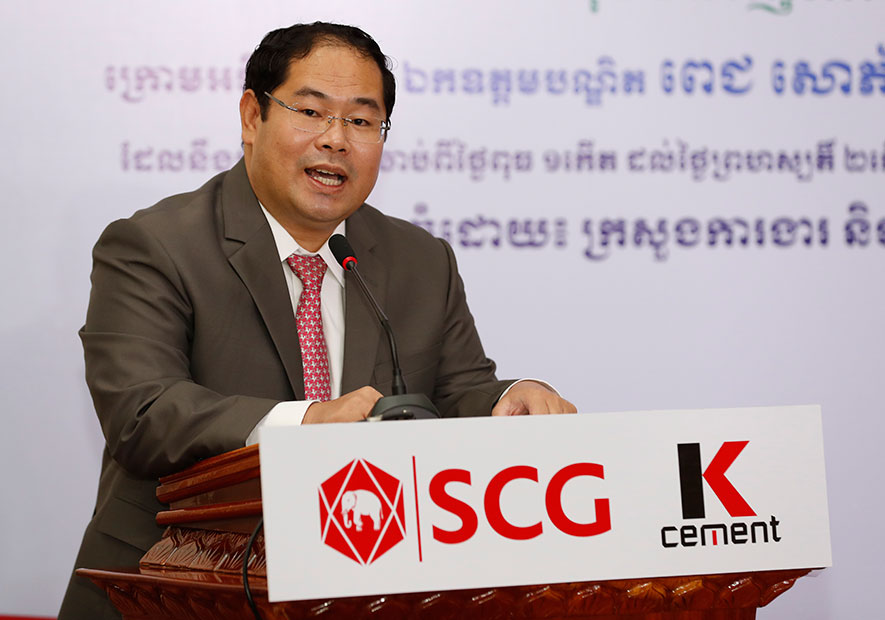 “In fact, the challenges to create added value are increasing. We do not have skilled workers in these areas so foreigners will take these jobs. That leaves local workers to do unskilled jobs, so they go to work in the garment sector or migrate,” Kim says.

The skills deficit constrains increased labour productivity because of the lack of an effective skills development system to upgrade the talents of the existing labour force, according to the World Bank’s report. Assuming that today’s educational attainment improvement rates continue into the future, only half of Cambodia’s labour force will have completed secondary school by 2045. The World Bank suggests that the education system is not a solution to the current stock of workers, who will constitute the largest share of Cambodia’s workforce for many generations.

“Instead, the skills of today’s workers need to be quickly upgraded to meet demand. However, Cambodia’s public and private skills development system is fragmented and small and reform efforts so far have focused on setting standards rather than developing feedback mechanisms from the ultimate clients (the employers) or creating results-based incentives for training institutes,” according to the World Bank.

“Only 22 percent of registered Cambodian employers are offered formal training courses, compared with an average of 57 percent in the East Asia region as a whole,” it says.

According to the report from the Ministry of Land Management, Urban Planning and Construction, the investment in the construction sector rose 34.7 per cent year-on-year in the first nine months of 2019, reaching $6.5 billion across 3,433 projects involving more than 13 million square metres, compared with $4.8 billion across 2,541 projects in the same period last year.

The Ministry of Land Management also said that an average of between 147,450 and 150,000 people were working daily in the construction sector from January to September this year, of which between 43,400 and 43,500 were in Phnom Penh alone.

In contrast with Diamond Island’s Chin, unskilled workers in the construction sector can earn from $7.50 to $10 daily, skilled workers can get from $10 to $15 while engineers, architects and other professionals are paid from $400 to $2,500 monthly, the report says.

Speaking at the second National Contractor Competition to Upskill Local Builders held in Phnom Penh late last month, Teang Sak, the director of the ministry’s Department of Standards and Curriculum of Ministry of Labour and Vocational Training, agreed that there is a shortage of skilled labour in the construction sector in Cambodia.

Asian Development Bank Country Director in Cambodia Resident Mission Sunniya Durrani-Jamal says that there is a big challenge ahead in preparing workers in manufacturing and construction. She says it’s hard to reskill them and the prospect of them becoming economic migrants is not good for the economy, especially when they come back with limited money, skills and job prospects.

“It’s important for Cambodia to create as many quality jobs as possible within the country to prevent this, but that will need more education and training for existing and future workers,” she adds.

“The required skills are not very high in the sector, so I think the question is not about whether we try to protect any one sector – it’s difficult enough to predict jobs in the future as it is – but rather the question for all of us is do we have systems in place that allow workers to continually upgrade their skills in existing skillsets or in new skills to meet the industry’s needs?” asks Durrani-Jamal. “Are the systems responsive to those skills? In terms of what happens to those workers when their skills are inadequate, then one of the things that often happens is, when immigration policies are open to these low-skilled workers, then they migrate to other countries where there is demand,” she adds.

Sak, however, says that the government, especially the ministry of labour, wants all youths to have a skill – one youth, one skill. He adds that skill is the backbone of the economy.

The government also calls on participation from the private sector to improve the skills of workers or students to meet the needs of the growing construction sector. It also provides the benefits for both parties – the private sector and government. He adds that when youths have skills, they can increase productivity and they are competent.

“We urge the private sector to help in providing capacity building for our workforce. With more skills, they can boost the productivity of their companies. We want our workforce’s skill levels to be comparable with other countries in the region,” Sak says.

The World Bank says that building this skills development system is such a massive undertaking – as highlighted in the government’s Education Strategic Plan 2014-2018 and the TVET Strategy: 2016-2021 – that in this report we only discuss policies for making the education and training system more responsive to the labour market.

If Cambodia can successfully upgrade the skills of its existing labor force through intensive, short-term and market-oriented skills development, while simultaneously strengthening the education system to shape the workers of the future, then labour productivity, innovation and wages will increase. When Cambodia’s workforce has more skills, this will attract foreign direct investment in higher value-added segments of existing GVCs and in new value chains. Productivity will also increase and will raise the earnings of those in subsistence household enterprises.

Will businesses pull out of Cambodia over tax reforms?

Crackdown on illegal logging amid call for sustainable wood production

The foreign bank is charting its growth for the next 25 years on the back of an expanding middle income segment The middle class group, which falls under the small and medium enterprise (SME) segment, promises to drive Maybank (Cambodia) Plc’s revenue into the future, says chief executive officer Mohd Hanif Suadi. “The social income […]