Production is already under way for author Lawrence Osborne’s critically acclaimed novel about the Kingdom.

Production is already under way for author Lawrence Osborne’s critically acclaimed novel about the Kingdom.

Few Cambodians may know the name Lawrence Osborne, but the tale he weaves in his 2015 novel, Hunters in the Dark may immediately conjure up a familiar image of backpackers aimlessly drifting through the Kingdom doing their level best to make minimal contributions to Cambodia’s tourism industry while staying drunk.

Osborne’s novel, which received a rousing response from international literary critics, focuses on one such lost soul; Robert Grieve – a 28-year-old British school teacher who is driven from his native England by a rootless sense of ennui. This aimlessness leads him to Cambodia and ultimately allows him to be carried off by the current of the novel’s plot as he struggles to find a sense of self. Forces beyond Robert’s control send him on a pilgrimage across Cambodia, where he is played and pursued by a corrupt police officer, a swindling US and a maternally anxious Khmer doctor.

Following in the footsteps of so many young Brits who head to Southeast Asia in some delirious bid to find themselves, Robert’s path soon veers off the beaten track and through the sinister underbelly of Cambodia.

Osborne’s novel was optioned for adaptation in 2017, but now at last the production is making some headway. Given that almost all of the story takes place in Cambodia, Osborne hopes to see the majority of the film shot here and predicts plenty of opportunities for up and coming Khmer actors.

“Often in these situations, the writer gets an honorary title; executive producer,” explains Osborne, who now resides in Bangkok, Thailand.

“So I wasn’t quite sure what this would entail, I’ve had other books optioned and it really varies on the producers and what they want from you, but in this case since I’m the only person involved who has spent some time in Cambodia, I’m actually doing quite a lot,” he chuckles. Osborne’s experiences in Cambodia have been fairly comprehensive by Western standards – having visited initially in the 90s and then more consistently over the past 19 years. 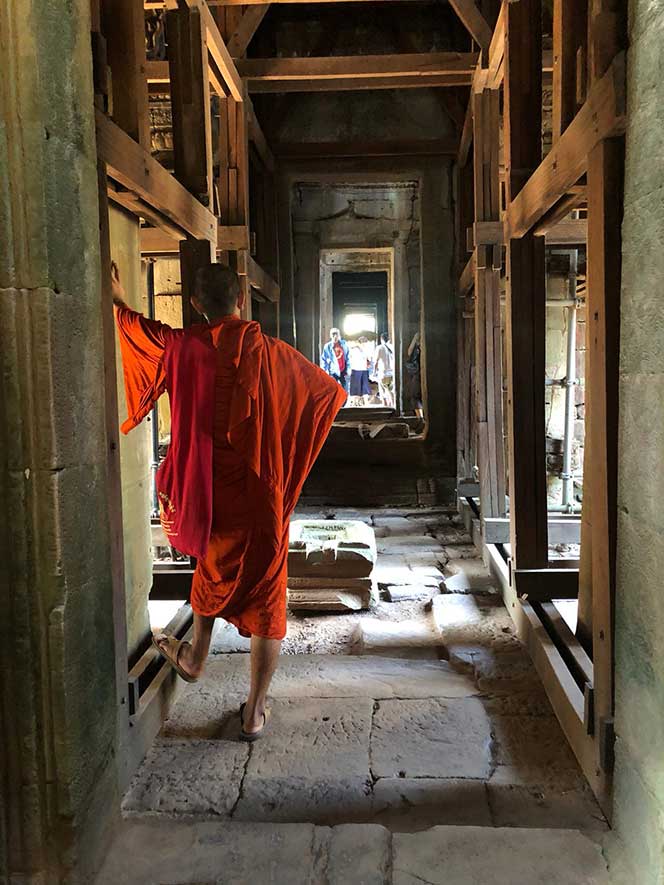 This, he notes, has given him plenty of time to make the necessary contacts to get Hunters in the Dark filmed here – contacts he hopes to leverage to find Khmer actors for the multitude of parts yet to be cast.

I tried, but trying and succeeding are not the same thing,” he says modestly, noting that all of the places he wrote about in the book are places he’d spent time at while staying in Cambodia.

At the helm of the production is British theatre director Simon Evans. Hunters in the Dark will be his directorial debut when it comes to feature-length films, but he is excited to take on that challenge here in Cambodia.

Evans has spent the last two weeks recreating the character’s journey through Cambodia – from his initial border crossing at Pailin, down to Battambong and eventually as far south as Phnom Penh. To assist him on this epic cross-country quest, Evans enlisted the help of Roland Neveu – a veteran war correspondent photographer who documented the fall of Phnom Penh in 1975 and has since worked as a stills photographer on films such as The Killing Fields, City of Ghosts and First They Killed My Father.

“I’ve been to the places where he goes, the principal character goes in the book and it will be thrilling to be able to film in those spots,” says Evans, who, having never visited Cambodia before, expresses his delight at having discovered so much of the Kingdom’s beauty over the last two weeks.

“You don’t usually get to see the places that you’re trying to recreate in a film, but this trip has been much more for me to understand where the character is when each moment happens to him – when you can see that place, you can look at it and ask yourself ‘what about this place makes these events more probable?’”

For as much as Osborne has tried to guide Evans, putting his years of experience in Cambodia to good use, the two are not working alone, with Indochina Productions’ Nicholas Simon pitching in as a producer on the film.
The Bangkok-based production company have worked on a range of international films, from Kong: Skull Island set in Ninh Binh, Vietnam, to A Prayer Before Dawn – an independent film about a British boxer confined in a Thai prison. Their involvement, Simon tells me, stems from their success in the region.“I’m one of the producers on the film, but the specialty that I bring is I’ve been producing in the region since 1995 and in Cambodia specifically since 1997. 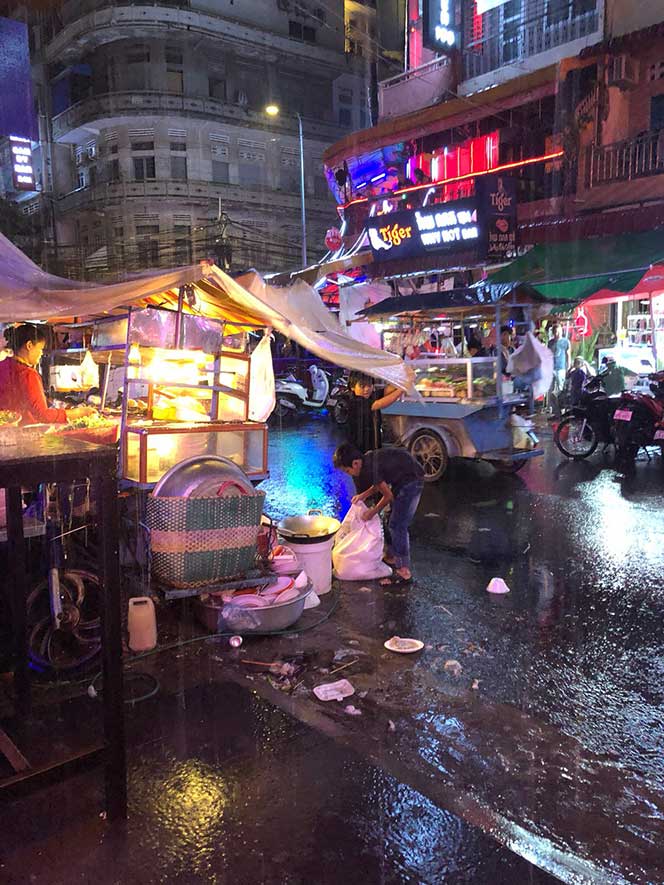 “In Cambodia, I’ve done Matt Dillon’s City of Ghosts, we did Transformers 3 and a large number of international TV commercials and stuff so I’m familiar with working there and I can bring that local and regional expertise. I also produced A Prayer Before Dawn, which we shot here in Asia and we raised money internationally, but that premiered in Cannes and went on to do well worldwide,” he says. The challenges facing the production are many. For Osborne and Evans, there is the predictable difficulty of basing a script off the book.

“Whenever you’re adapting a novel, certainly one that’s written with Lawrence’s skill, he can explain what a character is thinking very, very easily and Lawrence really does let us get inside the heads of each of these characters, but I can’t have a character standing onscreen just explaining to the audience exactly what they’re thinking,” explains Evans, who says that subsequently, there have additional scenes added to the script in order to make sense of these moments.

“I wrote the book a few years ago, in 2013, so it’s already six years old and I think my impression – I come to Phnom Penh very often – I see the city has changed a lot in six years,” reflects Osborne.

“I think there are basic things in the structures that economically and socially have changed, so the challenge in the film, and in doing the script, was to update the novel.”

While finances are still pouring in to get the production rolling, Evans says he expects to work with a budget somewhere between $5 and $10 million, landing Hunters in the Dark firmly into the indie film category but, as Osborne notes, Indochina Productions have done wonders with much smaller budgets.

“The most difficult thing is matching the financing with the talent for independent films. It has nothing to do with Cambodia. Once we get the actors and a budget that corresponds with them, that’s the biggest challenge,” says Indochina’s Simon, who goes on to explain that Cambodia presents its own “unique” challenges in terms of filming.

“The Department of Ministry of Culture, the Department of Cinema, the Cambodia Film Commission have all made it a lot easier, but there’s a limited crew base. There’s limited equipment in the country so you always have the challenge of how to move the money around,” he says.

Other practical challenges involve casting – especially for the Khmer parts, of which there are plenty. Osborne explains that there are only three roles played by foreigners and that the rest will be made up of local actors.

Simon of Indochina is optimistic about this however, citing his experiences filming in the Kingdom, “There’s a good track record of casting Cambodians for Cambodians.”

This, he says, greatly affects the script because the dialogue will be a 50:50 split of English and Khmer, but Osborne hopes that local actors will be able to improve upon his Khmer dialogue and rewrite it into something more natural.

There is, he notes, a danger with Hunters in the Dark given that by his own admission, Osborne is a foreigner in Cambodia and writing about Khmer culture from an outsider’s perspective, he hopes it is interpreted in a way that presents the Kingdom as he has enjoyed it.

It’s a pathology within our own culture. We go into these other cultures – to call it colonial is sort of dated now like the notion of Orientalism. It’s something else, especially with the young travellers today,” he reflects.

“This is a film we’re making. It’s not a piece of academia, but I do think it’s interesting that in a country that is trying to reinvent itself, that’s trying to find a new face and is struggling to sort of make peace with its past – I went to the Killing Fields and it’s a very strange juxtaposition of tourism and horror and as a country that is trying to not forget what it was, but trying to wipe the slate clean and start again,” explains the director, noting that Robert Grieve – the main character of the novel – is in Cambodia with a view to making his own clean start.

“We have a long-standing relationship and we don’t want to be disrespectful to Cambodia. That’s not the point, so I think that there might be some nuances that we need to work through, but I think overall, especially having seen the movies that they’ve welcomed in the past, then there should be a really positive response to this,” he says.

There remains no fixed date on which Hunters in the Dark will start shooting, but all involved are hoping for a return to Cambodia early next year to get the project off the ground.

This is part of a growing trend that is seeing Asia gaining more attention on the international film scene.“The Thai production industry will probably be a $200 million a year business on foreign productions and TV commercials coming to Thailand – it’s expected to double from last year – they have a film incentive in Thailand,” explains Simon, who is optimistic about what Hunters in the Dark can do for Cambodia.

“Not only do these movies have soft power – people watch them and see how beautiful Cambodia is – but it’s also soft power showing that the government’s allowing this, that there’s a freedom to film and then there’s the actual tourist dollars, the actual money that’s being spent in trade multiplies much faster than if you’re building a garment factory,” he says.

Osborne shares his optimism and seeks to enlist local band Krom to provide the soundtrack to the film, but he also sees a range of opportunities for young, local actors hungry for a chance to make it on the big screen.

“If we do a really good job of Hunters in the Dark, it’ll still go Cannes,” says Osborne.

The mighty Mekong at crisis point

The 4th industrial revolution has arrived. The world around us has changed. Many grew up during the industrial age, which saw wealth and convenience grew exponentially.