Cambodia is currently experiencing a growth in construction industry like no other time in the Kingdom’s modern history.

Cambodia is currently experiencing a growth in construction industry like no other time in the Kingdom’s modern history. In particular, this boom has resulted in a rapid rise of skyscrapers that have forever changed the country’s skyline, from its capital Phnom Penh to the once sleepy coastal towns of Sihanoukville and Kep.

The majority of these developments have come from a large influx of Chinese investment. With such a massive increase in high rise construction, building codes must be followed to ensure construction standard, quality and safety.

It is time to take serious action against illegal construction practises.

It was 4:30 pm on Friday, the 3rd of January this year, when a seven-story under-construction building collapsed in the city of Kep, killing 36 people and injuring another 23.

This tragedy happened just seven months after a Chinese-owned and unlicensed seven-story building collapsed in Sihanoukville – resulting in 28 dead and 26 injured.

Speaking to a reporter at the scene, the Interior Minister Sar Kheng stated the seven-storey building collapsed in Kep because of the poor quality of construction materials and lack of thorough inspections.

“The reason of the collapse is because of the poor quality in building,” he said. “Even now no specific people are held responsible, but one thing we know is that the building material was not up to standard.”

“The building’s constructor wrongly placed the rebars, which are smaller than the safety level standard required, this is the first mistake, while another mistake is related to the concrete slap casting. This means that the constructor rushed to remove the formwork in less than 10 days, technically it can be removed after 28 days,” he explained. 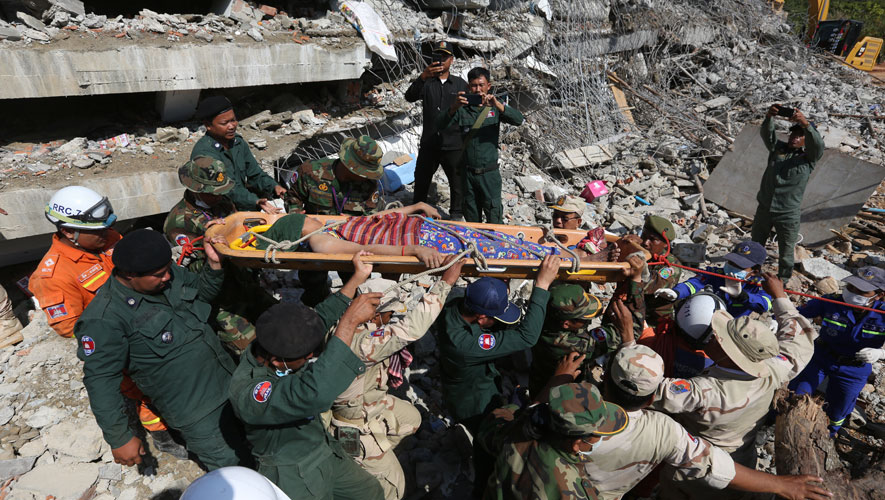 New construction laws had only recently been declared on 2 November last year. Normally, new laws take approximately six months to be fully implemented after the law has taken effect.

In article 7 of Chapter 4, the law states: “All construction work shall comply with building technical regulation.”

Punishment, which is stated in article 90 of chapter 20, for failure to comply with this law include a written warning, suspension or revocation of a license or a permit for construction professionals, transitional penalty, prohibition against professional practices, forced demolition, and or rebuilding to the original condition, fine and imprisonment.

The same chapter in article 96 states that any person who conducts any construction activates without a permit and causes an injury to or damages the health of others shall be punished by imprisonment from 1 to 3 years and receive a fine from 10,000,000 riels to 20,000,000 riels.

Prime Minister Hun Sen said the law will play a critical role in helping to reduce the occurrence of building collapses caused by a failure in construction standards and quality.

“I believe that after the law is fully implemented, such incidents will be reduced or permanently eliminated,” he said.

The International Labour Organisation (ILO) on Tuesday issued a statement, calling for the government to tackle the problem with strong measures.

“The ILO is very saddened and concerned to hear the tragic collapse of a building in Cambodia’s coastal province of Kep, on January 3, resulted in the unfortunate deaths of 36 and injuries to another 23, all of whom were working when the accident happened,”

“Tackling this problem calls for action with comprehensive measures that include a review of regulations and their enforcement in the construction sector, the introduction of occupational safety and health standards and building safety standards at all workplaces, intensified labour inspections and zero accident campaigns, as well as promoting a preventive safety culture in all workplaces,” the ILO said in its statement.

As part of its annual publication ‘White Book’, the European Chamber of Commerce has issued a list of recommendations for the government to support the development of the real estate and construction sectors.

EuroCham launched the 2019 edition of the White Book in mid-2019, delivering a set of trade and investment policy recommendations developed by members of the chamber.

Safety in the construction sector is an important theme in the publication.

“In the construction context, all construction companies operating in Cambodia should be required to have their designated safety officers undergo mandatory occupational health and safety training before starting a new project. While implementing regulations that require structural building materials manufactured in the country to undergo independent quality assurance testing prior to sale,” it says.

Regulations to control the construction industry in Cambodia have not kept pace with the rate at which the industry has grown and developed during the past 5 years, according to James Hodge, a senior director and expert at CBRE Cambodia.

“Stricter over-sight and standards are now in force and there is clear growth in the capacity of the relevant institutions to handle the review and inspection of sites. However, as is clear from the recent tragedy in Kep, the previous construction inspection and planning regime lingers in the quality of some of the properties under construction,” he said.

With so much construction ongoing, Mr Hodge said this is clearly a difficult task to ensure that all the necessary checks are undertaken appropriately, but this is incredibly important and construction should not proceed until officially authorised to do so.

“Safety in the construction of buildings needs to be of paramount consideration for all parties concerned and each market actor has an ethical responsibility to ensure that the rules have been complied with; if this principle is followed it will help to ensure all contractors and developers follow the rules,” he emphasised.

“Demand for structural surveyors is likely to increase as a greater number of occupiers seek to check the integrity of buildings prior to a transaction taking place, and we may see pressure for adjustments to the law in order to ensure occupiers are better protected from rogue developers, he wrote in an email to CapitalCambodia on Wednesday.

He further explained that the costs of some construction projects will likely increase as a result of the changes in regulations.

“But if the construction is not safe and it is not in the interests of anyone for that building to continue construction, and given the cost to life it is better than the economic consequences to be realised for a few projects.”

How China is trying to attract more foreign capital

Problems on the home front