Just off the highway lies SSEZ, silently growing on the back of perserverance despite challenges

A change of heart from just launching an initial public offering (IPO) in Hong Kong, SSEZ president Jack Chen says it is currently discussing with the Cambodian government and CSX.

“Negotiations are ongoing now with CSX. The government says it will support our listing. We still have some concerns, hence our discussion,” he tells Capital Cambodia in an interview.

Its close proximity to the Sihanoukville Autonomous Port and International Airport makes it a viable industrial area for investors, made sweeter by lower land price than Sihanoukville Economic Zone (SEZ) along the coast.

“SSEZ is an iconic project for the Belt and Road Initiative (BRI) that is aimed at creating a trading platform for enterprises,” Chen says.

SSEZ sprawled across 1,117 hectares, about 14km from the Sihanoukville coast, hosts 153 companies with a total investment value of nearly $1 billion, and 23,000 workers employed thus far, after breaking ground in February 2008.

“We believe we are the driver of the economy in Cambodia with over 150 companies here. Out of 23,000, more than two thirds are locals and some 1,000 comprising foreign workers,” Chen says.

The business model involves attracting investors who lease the land, and has its facility developed by SSEZ.

Positive year-on-year growthGrowth has been steady since its existence despite the global economic slowdown. It sees an annual revenue expansion of 10 percent. In addition, its return on investment has been been more 20 times.

It expects more than 10 percent year-on-year growth for new investors, he says, adding that some 10 foreign companies who operate in the traditional manufacturing sector such as garment makers are likely to set up shop in the economic zone by the end of 2019.

Fourteen of the companies, involved in mostly garment and bag manufacturing, forklift assembly, and flooring are from the US, Italy, Vietnam, France, Thailand, Korean while the rest are from China and Cambodia (six providing service-based operations).

“We have a specific company that is tasked at attracting foreign investors. Ideally, we are looking at 10 more investors in SSEZ this year.

Based on his 10-year experience, he notes that being in SSEZ is like a “lucky game” as companies are able to enjoy the one-stop service including application, registration, customs clearance, and inspection.

The economic zone’s five-year plan is to house some 300 companies by recruiting more mainland China and international companies that are credible and innovative, with the aim of improving the lives of Cambodians as they would benefit from on-the-job skills training them.

The economic zone has a bank and clinic, and is in the process of building a mall and additional living spaces for the convenience of the workers.

Since 2008, SSEZ has spent $200 million for land acquisition, infrastructure and development. This year, it has set aside a capital expenditure of $30 million where up to 80 percent will be used to build a power plant to supply uninterrupted electricity to the industries.

Chen says the Cambodian government appreciates the work done by SSEZ because it boosts local economic development and raises the national employment rate.

“The per capita income in Sihanoukville is $3,380 per year compared to Cambodia’s gross domestic product per capita of $1,285 annually.

In fact, it is keen on ccoperating with SEZ to optimise their respective advantages.

“We are not competing with them. SEZ has better location as they are next to the port but in terms of size, we are bigger. I believe they have two of three companies located in SEZ,” he adds. 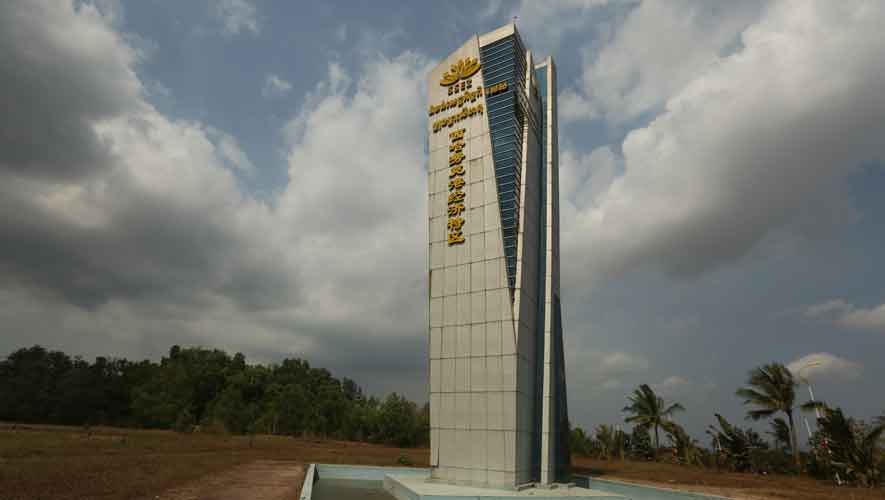 The risk from Everything but Arms withdrawal

While the European Union reviews Cambodia’s political policies in relation of the EBA, garment and shoe producers have sounded the alarm on the possible negative effect on exports.

“We contend it will be a big impact on the country but we are confident that companies in SSEZ are not so affected because they mostly export to the US and Japan,” Chen says.

However, it will try to avoid the risk by attracting more value-added companies as they are more sustainable, and would benefit the workforce in the long run.

Skilling up for the future

Despite challenges of unstable infrastructure including water and electricity, and industrial support SSEZ soldiers on to raise the standard of its labour force.

“Compared to Thailand and Vietnam, Cambodia is still in a weak position vis-a-vis its infrastructure and technical skills. For example, Thailand has far advanced tyre manufacturing technology,” he says.

The two-month courses are free and have seen some 40,000 staff trained. The number is based on the classes enrolled. There are 700 staff registered for the courses that are conducted before or after work.

“The classes include financial management, international trade, management service, and automobile service. These subjects enable the workers to work in other sectors in future,” he adds.

Finding a path forward in the economic zone

ASEAN youths learn a thing or two about silk weaving