Region gets a taste for Cambodian craft liquor

As the craft beer industry gains momentum in Southeast Asia, a quieter boom has been happening across the region: The growth of local craft spirits is now making itself known internationally.

Such growth can only be described as mind-blowing, but it is Asia and the Pacific that is said to be the largest driving force behind this, with whiskey taking the largest market segment and gin poised to be the fastest growing spirit in the region.

Naturally, the data is somewhat harder to come by in Cambodia, where just two craft distilleries work hard to provide the Kingdom and beyond with quality craft liquor.

Cambodia’s bartenders were first introduced to locally distilled craft gin in 2018, keeping the Kingdom in line with regional trends.

“Four years ago in Japan, you didn’t have anyone – now you have at least four or five that are doing gin, so it’s getting popular there,” says Spanish Marco Julia Eggert, founder of Seekers Spirits – the country’s first and only gin distillery.

“In China, you also didn’t have anyone and now there are a couple of them, so craft gin is slowly coming to this part of the world and, like in every region, there is the strength of localising and using the local regional products so I think that’s actually a trend towards quality,”

Eggert turned away from the hospitality background that’s kept him occupied in Phnom Penh and, together with Tania Unsworth, from the UK, founded Seekers Spirits, which sees an opportunity in the growing trend for quality products in the food and beverage sector.

“I think that’s really a big factor and people want to be sure about the quality. Unfortunately there has been a lot of, you know, badly produced spirits in quite a highly unregulated environment,” Unworth says.

“So that was always going to be the key factor – making sure that you have quality that’s really exceptional,” she adds.

Reflecting on how they ended up as the first distillers in Cambodia of a spirit so ubiquitous as gin, Unsworth puts a lot of their success down to their exposure to the Cambodian markets.

Both she and Eggert have run a string of restaurants and hotels across the Kingdom, giving them valuable insight into the way business is conducted in Cambodia – as well as the demands of the local market.

“We also have good networks within that industry, which has also been a great benefit in terms of our route to market and our distribution within Cambodia and getting it into what is now more than 100 different accounts,” notes Unsworth, as she reveals that Seekers is currently finalising a distribution deal that would see Seekers Mekong Dry Gin exported across the Southeast Asia markets.

Eggert expands on this and says that their plans extend beyond just the region, with the distillery also in talks with Australian distributors as they plan to take the Cambodian brand beyond the region by the second quarter of 2020.

He goes on to say that across the region, the market for premium spirits is growing continually while those offering basic spirits are – depending on the country – stuck in terms of growth.

The International Spirits and Wine Record (ISWR) is laying a lot of growth in the Asian market at the feet of gin, which it reports holds huge potential – but curiously it was the premium and super-premium segments of the market that expanded the most, growing 50.1 percent from 2013 to 2018.

“When you talk about premium gins, our price point this just below the other international premium gins,” says Eggert, whose gin typically goes for $29 per bottle in their distillery, but varies from retailer to retailer.

The distillery duo has already landed a deal with Phnom Penh’s luxury hotel Raffles which sets them the challenge of creating a unique, co-branded gin exclusively for the hotel’s illustrious Elephant Bar in a bid to showcase the quality of Cambodian-made products and ingredients.

“We work closely with Raffles, with Sofitel, the Rosewood and in Siem Reap, Park Hyatt and the Belmond. I mean all the – you can say relevant – hotels in the country. But the great thing is that four- and three-star hotels and the little bars all over the place are also stocking us, which is great to see.

“It shows that people are willing to bet on quality not only in the fancy places, but also in smaller independent bars.”

While Seekers are showing no sign of stopping, they were by no means the first movers in the Cambodian market – Samai Distillery has been producing arguably the finest rum in the Kingdom for more than five years now.

Shocked to see the absence of quality rum produced in a country so abundantly blessed in sugarcane and molasses, Venezuelan founders Antonio Lopez de Haro and Daniel Pacheco have fought to disseminate the virtues of Cambodian spirits.

“At the beginning it was tough to overcome the perceptions that Cambodia only produces low-quality spirits, but as we educated the consumers – thanks to our open-house that we have every Thursday night – and as we have earned around 12 international awards, including some Double Gold Medals [the best in the industry] we have now proved that Cambodia can indeed produce world-class spirits,” says de Haro.

Cambodia presents the same challenge to almost every industry, but for the rum production business that de Haro and Pacheco dreamt of, finding employees was compounded because the skills were “literally non-existent”.

However, five years of blood, sweat and rum has seen Samai thrive – going on to supply rum to more than 140 on and off trade accounts within Cambodia, as well as exporting to France and Singapore.

Despite this success, though, he says that their limited production capacity is what stifles their growth.

“We are always sold out of all our products, sometimes even sending to export markets less than they order because we cannot produce enough. However, we are currently in a new investment round and are planning to build a new distillery by next year, so that we can then enter around five new markets per year,” adds de Haro.

Although Samai produces 1,000 litres per month, this actually only equates to 500 bottles each month because of their strict adherence to quality control that requires a minimum of two years ageing in oak barrels, but each bottle ranges from $22 to their latest creation, Samai PX Limited Edition which weighs in at $68 per bottle.

“As for demand there’s also big growth for craft spirits, not only in the region but also globally,” de Haro stresses.

“As our brand gets more exposure and becomes known, we have had importers and distributors from all over the world contacting us to source our products – there’s definitely a growing interest for artisan craft spirits in Cambodia,” he adds.

As Cambodia’s craft spirits scene finds its feet, more and more regional artisans are opening the market up further, supplying not just more competition, but a robust network of collaborative knowledge sharing craftspeople who are approaching the spirits industry with innovative outlooks. 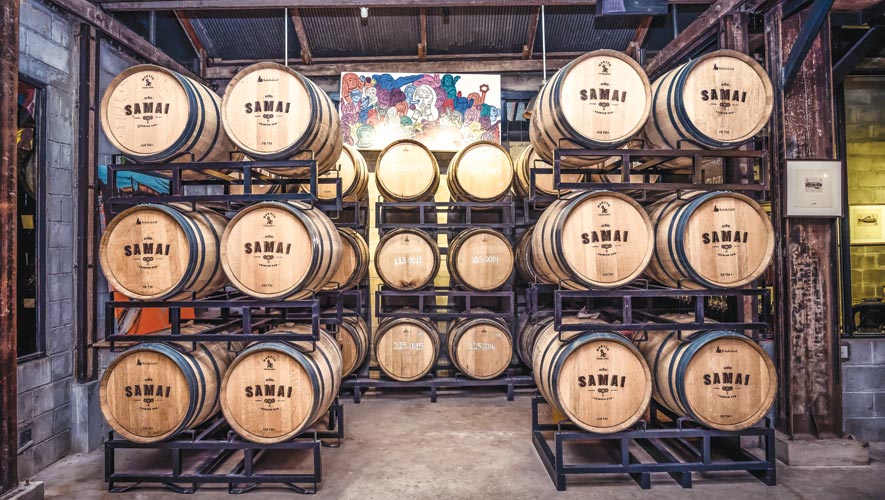 Based in Hanoi, Vietnam – Sông Cai Distillery is bracing for a nationwide release this November, after which it intends to take its craft gin off to Australia and Thailand for similar releases.

The founder, Daniel Hoài Tien Nguyen, sees big potential for craft spirits in Southeast Asia, but is wary of overblowing the industry – especially given the regulatory environment.

“I think it’ll take a while for it to accelerate the way that craft beer has done, mostly because of regulations, but we’ll see how fast that movement grows,” he says, suggesting a connection between craft spirits and the development of local cocktail bars.

“I think another good indicator is how fast the cocktail scene is growing as well. You know, every time we go to Saigon we see another handful of new bars popping up,” Nguyen says.

He is open about the fact that he has never before applied for a distillation licence – let alone in Vietnam, but it was, he concedes, difficult.

“I know some of our colleagues in China took two years to get theirs – in places such as Thailand, it’s almost impossible to get a distillery licence so, although it did take us a while, in the grand scheme of things, what we’ve been hearing from other colleagues is that it’s not as difficult as it would be in other countries, but definitely, it’s an uphill battle, especially for Western-style spirits.”

He cites the regulatory body in Vietnam not knowing quite how to classify gin, given the lack of licences issued for such a spirit before, which initially provided an obstacle to his plan for crafting 30,000 litres of dry gin per year, but now presents itself as a future bump in the road for when Nguyen wants to start distilling whiskey.

While he may require a different licence for each spirit he seeks to create, there are many barriers to entry for craft spirits that Nguyen holds responsible for the slower development of the industry across the region.

“It’s also capital intensive, based on what kind of spirits you’re trying to make, so I think that there’s a lot of barriers to entry in terms of spirits that I don’t think other industries face – it’s something that’s actually quite strictly regulated and even kind of almost prohibited, so that definitely impacts your trajectory for development,” he says.

While the difficulties may lie in navigating the varied regulatory pitfalls of the region, he believes that we’ll see more distillers setting up shop in neighbouring countries.

“It’s a function of itself. I mean the ingredients are literally in your backyard, so we don’t really deal a lot with big spice companies, except for things like juniper – which we have to import because it’s not grown in Vietnam, but everything else is. It’s pretty amazing the amount of local ingredients we can play with.”

Where Song Cai Distillery differs is perhaps in the collaborative capacity building efforts it maintains with ethnic minorities in northern Vietnam. Many of the botanicals and herbs used in its gin are farmed by communities of ethnic minorities and, as such, Nguyen remains resolute on developing the skills of these partners, advancing their food-processing capabilities and ensuring the survival of rare herbs and seeds in the area.

This is still very much a business for Nguyen though, who is set on crafting an international brand.

“Exports are going to exceed domestic [demand] just because there are more consumers outside Vietnam, but we’re committed to Vietnam. It’s always home base for us, but the whole international market – that’s going to be a major source of our market direction in the near future.”

Migrating to the digital world

The real estate sector of Cambodia has progressed tremendously in the past few years with a lot to do with foreign direct investment bringing big companies and entrepreneurs alike in Phnom Penh.

While numbers show an increasing demand among tourists, the sector also faces challenges