The demand for new houses, particularly affordable homes has been increasing year-on-year in the Kingdom due to the increase in minimum wages for blue collar workers, backed by favourable government policies. The migration of people from provinces to urban locations for better job prospects has also driven the growth in demand.

According to the National Institute of Statistics, the 2008 general population census showed that Cambodian population would hit 18 million in 2030. In 2013, NIS recorded 13.39 million Cambodians.

Based on this figure, Cambodia would need to build 50,000 units per year to meet the demand due to rapid urbanisation, says Lao Tipseiha, secretary of state of Land Management, Urban Planning and Construction Ministry.

Ministry data reveals that the figures for construction have been erratic from 2015 when 10,309 houses were built. A year later, 30,933 houses were constructed, in 2017, and 21,094 units in 2018. Between January and April this year, 2,273 units were built. Altogether, 253 locations in Cambodia saw new satellite city and borey residential projects.

The national program for development of affordable housing in 2017 states that the rising year-on-year housing price makes it difficult for low and middle income earners to buy new houses.

Government to the rescue

In 2017, the affordable housing policy was drawn up to improve the lives of low and middle income earners by encouraging developers to shift their focus to low-cost housing development. The policy provides incentives for developers such as tax breaks and reduced red tape including approvals for construction permit and business licence. The policy also allows for special rates for income tax, property tax and value-added tax.

However, to enjoy the incentives, projects must comprise 100 low-cost housing units priced between $15,000 and $30,000. The projects must be within 20 kilometres of Phnom Penh, and city and must feature green spaces. Developers must also cooperate with financial institutions to create credit schemes with low interest rates to enhance the project’s affordability.

A study by United Nations Development Program says that nearly 9.8 million Cambodians lack access to decent housing. It adds that although 8.8 million of low-income workers can afford the cost of the house, adapted housing finance is out of their reach.

Only two takers, so far 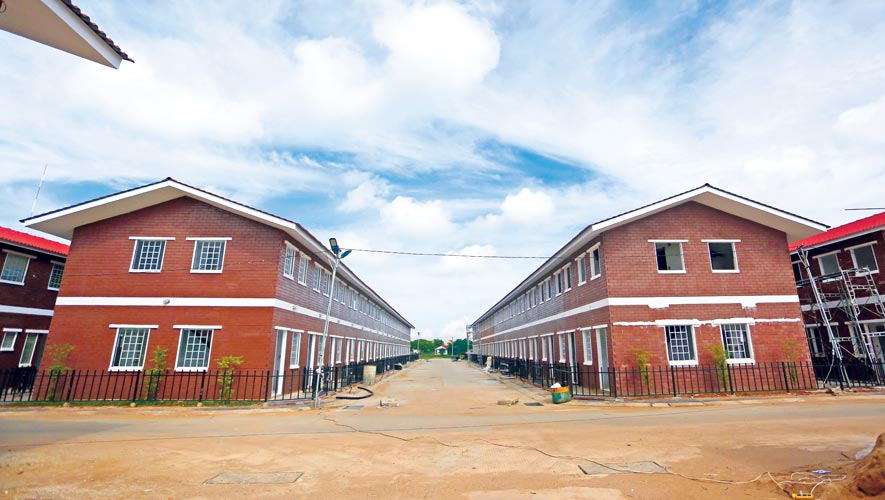 Vongsy Sam, director of the Central PPP Center of the Cambodian Ministry of Economy and Finance tells Capital Cambodia only two developers applied for affordable housing licences although two years have passed since the policy was introduced.

“We have not seen many developers apply but I assume that if the pilot project by WorldBridge Homes Co Ltd is successful, others would show interest,” Vongsy adds.

He contends that the government has yet to widely promote the policy as it is preparing the assessment framework on the affordable housing project.

“We have issued one licence which we are monitoring. After this first project, we would have some experience and would be able to handle other applications,” Vongsy adds.

In January 2017, WorldBridge invested $100 million, kicking off the first affordable housing project in Cambodia called Serey Mongkul Satellite City on a 45ha site in Krong Takhmao. The units are priced from $25,000.

In the meantime, Phnom Penh Special Economic Zone (PPSEZ) aims to build 3,000 units for its workers, says chief executive officer Hiroshi Uematsu, adding that it will resubmit its plans to the government, having changed the project location.

“We will set a price that is affordable for everyone not only garment workers who live within PPSEZ but also those living outside the zone and are categorised as low income earners. Building low-cost homes sits well with our philosophy,” Uematsu tells Capital Cambodia.

Presently, the workers rent dormitories which have poor living condition, he says, adding that improving their living standard is the main reason behind building the housing units.

PPSEZ would be collaborating with one of its tenant Minebea Mitsumi Inc on a low interest loan scheme.

“The scheme allows potential buyers to put down a deposit of up to 30 percent of their income. We have to create a loan scheme that will support their financial ability,” he says.

Challengers in the fore

Cambodian Valuers and Estate Agents Association president Chrek Soknim says that with rising demand, developers can sell if they have a project.

“It supports the lower income group particularly factory workers, and civil servants. The price is below $30,000 per unit.

“If a developer intends to invest in this segment, land price is affordable because it is located 20 kilometres from Phnom Penh. The land price is below $40 per square metre,” he says.

However, there are plots of land that cost $80 to $100 per square meter which deters developers.

“I agree that the price of land is a challenge to developers. This is compounded by quick price hikes.

“If the land price in the project has doubled, profit margin reduces which is something that project developers also understand but we need to follow the policy closely.

“We are waiting for applications to be submitted. We need to check the projects properly. It includes the total development value and incentives to ensure developers gain from the projects”.

Unlike its neighbours Thailand, Vietnam and Malaysia with less than five home-based airlines, the 16 million-population Kingdom has some 10 airlines registered, engaged in an unspoken clamour for capacity, profitability, and downright survival.

Cambodia’s rising population both in rural and urban areas, particularly Phnom Penh, has led to growing concern over ever-increasing waste and demands for an urgent policy to tackle it.