As the Cambodia-Thailand railroad reconnects after 40 years, investments and development open up Cambodia to vibrant trade in the region and world

As the Cambodia-Thailand railroad reconnects after 40 years, investments and development open up Cambodia to vibrant trade in the region and world

After 40 years, the reconnected railroad network, as well as the new cross-border bridge, and expanded National Road 5 between Cambodia and Thailand will boost the economy of the sleepy northwestern province, Banteay Meanchey.

It is also expected to see growth in development and investment projects, and serve as a crucial international gateway to Cambodia, Thailand, and Asean countries.

Located 360 kilometres from Phnom Penh, with 386 kilometres of railroad through the province linking Poipet and Phnom Penh in Banteay Meanchey province, it shares the border with Thailand along with three border crossings.

At present, three of these international checkpoints comprising Poipet, Malay regional border in Malay District and Boeung Trokourn in Tmor Pork District have high volume of import and export activities.

In the near future, Stung Bot will serve as an international border gate between Thailand and Cambodia.

Agriculture is an important sector, raising the living condition of farmers through paddy rice, tapioca, and other crop production in Banteay Meanchey for the export market.

However, it is believed that more sectors will flourish in the province, including tourism, industrial and residential development, hotels, casinos and resorts.

According to Po Eavkong, chief executive officer and co-founder of Advance Real Estate Co, Banteay Meanchey has great potential of becoming a hub for business, trade and tourism for Cambodia and Thailand.

The most important benefit will go to Poipet on the back of increased investors from China and Japan.

“In Poipet, there is the Poipet O’Neang Special Economic Zone (SEZ), which is expected to contribute to the industrial development of the province,” Eavkong says.

In addition, a new bridge called the Thailand-Cambodia Friendship Bridge has been constructed to facilitate freight transportation and alleviate traffic congestion at the existing border checkpoints.

The bridge would make transportation very easier within the Greater Mekong subregion from Bangkok to Phnom Penh, and with Ho Chi Minh City, in terms of trade and tourism.

It is part of the Asean Highway National Road 1 connecting the Southern Economic Corridor and Asian Highway network, linking Europe.

On April 22, Cambodia and Thailand reconnected their railroad networks after it was shut due to a war.

“The agreement on joint railway traffic, and the reconnection of our railroads again after they were separated in 1974 due to the war, will improve railroad transportation, which is an effective, cheap, and safe transportation method,” Prime Minister Hun Sen says at the site.

Cambodia has a vision and a specific plan to develop the railroad network in Cambodia and increase its popularity among Cambodians, he adds.

However, it requires Cambodia to diversify its economy further to develop new export industries as improving connectivity can play only a small part in facilitating this process, and help with exploiting opportunities once this process is underway and a new set of export products are produced.

“Apart from city centres and surrounding areas, border regions like those in the northwest can also benefitted from improved cross-border connectivity.

“The Poipet SEZ is now receiving considerable investment from Japanese multinationals as an alternative site to the Phnom Penh SEZ. Better connectivity to neighbouring countries and regions will increase its attractiveness,” says Jayant.

Cambodia has two existing railways consisting of the southern railway, linking Phnom Penh with Preah Sihanouk in the coast, and the northern railway between the capital and Poipet.

He tells Capital Cambodia that once the Stung Bot border checkpoint runs smoothly, cargos will pass through the Stung Bot zone while Poipet will be reserved for tourists.

“We want to improve the security and social order in Poipet. Therefore, investments will grow when there are links. This creates jobs for the people and boost their living standard,” says Reatrey.

Poipet was once a front war zone but now it is seeing robust growth.

“We cannot compare yet with Phnom Penh or Sihanoukville but we expect to be there in the near future,” he says.

Most of the investments in the special economic zones are by investors from Japan, China, Thailand who are involved in various manufacturing industries such automotive spare parts, and garments.

“As the provincial administration, we have actively contributed to the implementation of government project and policies to facilitate investors.

“We are also helping to push up the income level of Banteay Meanchey population. Their living standard is better now as agricultural prices have grown. With more investment and development, people’s livelihood becomes better,” Reatrey says.

Therefore, the benefit can be felt up from Sihanoukville to Myanmar port. Rail connection would improve Cambodia’s competitiveness.

“I would suggest that the government study the subdivision of railways in potential areas to save cost and time. Now production is high, including logistic cost,” he says.

Railways must be improved and modernised by having high speed trains to replace air transport.

“If we are slow, we will not get passengers or cargos. We have to modernise the railway,” Heng says.

Public Works and Transportation Minister Sun Chanthol says that trade is one way but with the rail link, bilateral trade will increase. 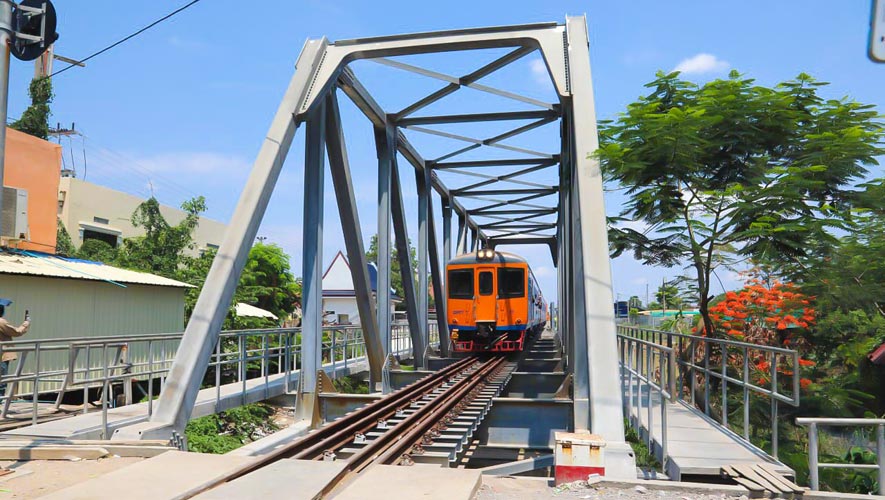 Chanthol adds that if Thailand wants to sell goods to Vietnam, they have to use the ASEAN Highway Road 1 which connects China, Myanmar, Thailand, Vietnam and Cambodia.

The government is expanding the roads to four lanes to facilitate the smooth passageway of passengers and cargos.

“We are looking for investors to build the expressway from Svary Rieng’s Bavet to the Vietnamese side, the Mok Bai international border checkpoint,” Chanthol adds.

The government is also planning to build a new train terminal in Stung Bot.

At present, the passageway for cargo and passengers via Poipet is narrow.

“Soon, we will have tourists using the old station through Poipet while cargos will move via Stung Bot. It is easier to check cargos which saves time.

“On the other hand, locals and tourists will be able to enjoy the train service, which is an added advantage,” he says.

Maybank Foundation and ASEAN Foundation selected 100 young persons including 10 Cambodians to participate in its competitive eMpowering Youths Across Asean programme.

The BRICS New Development Bank (NDB) will double its loan approval book from its current 8 billion U.S. dollars to about 16 billion dollars during 2019, the bank’s president Kundapur Vaman Kamath has said.