The UK’s exit from the EU could either cr

Addressing the British public on July 24, newly minted Prime Minister Boris Johnson reaffirmed his commitment to leaving the European Union with or without a deal, further stoking fears that a hard Brexit – or no-deal Brexit – will be the outcome the United Kingdom faces on October 31.

The pound fell to its lowest level against the US dollar in 28 months, dropping below $1.23 on July 29 amid fears of a no-deal Brexit. But for all the uncertainty that lies ahead, Cambodia is watching intently for signs of any opportunities.

This comes at a time when Cambodia’s relations with the EU and the US appear to be deteriorating over human and labour rights issues, leaving Cambodia’s key export industries – in particular garments, textiles and footwear – up in the proverbial air.

The US and EU make up 70 percent of Cambodia’s export market, so the prospect of Brexit could spell hope for the nation, which faces the potential revocation of preferential trading treatment from both US and EU regulators.

The Everything but Arms (EBA) preferential status that has enabled tariff-free exports to the EU from Cambodia is currently under review, with the results expected later this month.

However, the UK’s imminent exit from the world’s largest trading bloc offers Cambodian exporters the chance to at least retain a pocket of the EU market, potentially under similar conditions that are provided by the EBA.

In an interview with Capital Cambodia, Secretary-General of the Garments Manufacturers’ Association of Cambodia (GMAC) Ken Loo says, “It’s my understanding that, based on the information I have, the UK government has pledged to keep the benefits of EBA for Cambodia after Brexit.

“As far as GMAC is concerned, the position of Cambodia on Brexit is the faster the better so as to separate it from the EU, where the EBA status may be lost.”

While the Commerce Ministry could not confirm the UK’s pledge regarding a similar EBA-style deal, its spokesman Seang Thay explains that there are still elements of risk for Cambodia regarding a no-deal Brexit.

“The UK leaving the EU without a deal means returning back to WTO [World Trade Organisation] rules. In this case, we cannot say there is no concern, but we are ready to deal with this particular situation by looking into other opportunities that could happen through the UK’s external policy concerning least-developed countries [LDCs],” says Thay, noting that regardless of the UK’s relationship with the EU, Cambodia has choices beyond these trading partners.

Earlier this year, a report published by the German Development Institute, a think-tank specialising in research and policy in relation to global development, suggested that Brexit may have a dire impact on Cambodia’s economy and development.

“Our findings show that losing these preferences together with the UK’s withdrawal from the EU may cause EBA countries’ GDP to fall by 0.01 percent to 1.08 percent,” the report stated.

It went on to suggest that among the 49 LDC countries that currently benefit from the EBA when exporting to the UK, Cambodia would be among the hardest hit.

“The decline of bilateral exports also leads to a reduction of total exports for almost all considered LDCs with the largest fall of aggregate exports occurring in Cambodia (1.7 percent),” the report added.

Of those countries, Cambodia was again predicted to be the worst affected.

Beyond this, it noted that there were other variables that could further contribute to Brexit’s impact.

Among them are the ease with which the UK and Cambodia could trade on WTO rules, but Thay claims this should not be a problem.

“Trading on WTO terms remains favourable for us,” says Thay.

“At least we are on a fair, level playing field with the others.

“It would not be for replacement for EBA, but it is a solid ground for us to improve our performance.

“Cambodia is in the process to graduate from LDCs status, we are now diversifying both our export products and markets.”

He expresses hope for two-way agreements with the UK to reach the level of a comprehensive free trade agreement (FTA) but sees Brexit as a chance to begin bilateral negotiations with the EU as well, with an aim to foster more trade that is less reliant on Asean membership.

With newly appointed UK Foreign Secretary Dominic Raab meeting Asean leaders in Bangkok this past week to discuss trade, the UK looks set to expand its vision beyond its largest trading partners and neighbours in Europe and to build stronger ties in Southeast Asia. 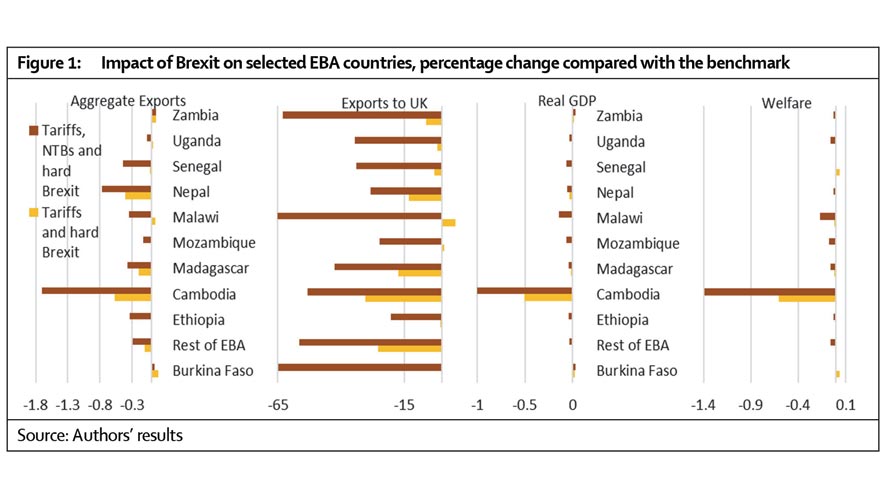 A spokeswoman for the British embassy explained that “UK-Asean trade is worth nearly £37 billion per year and our ever closer partnership will provide even more increased trading opportunities for British businesses after the UK leaves the EU”.

“The UK has taken steps toward strengthening this strong foundation and forge new, dynamic and ambitious partnerships with ASEAN, in which Cambodia is a member,” she added.

In 2018, Cambodian exports to the UK were worth $1.018 billion. For the first three months of 2019, Cambodia exported $224.6 million to the UK, according to the Cambodian Ministry of Commerce.

The outcome of Brexit remains uncertain and the prospects for Cambodia will hinge on the actions of the Cambodian and British governments.

Thay suggests that the government is prepared for this.

“It could be both an opportunity and a challenge since we must face certain changes,” he says.

“However, we are not totally dependent on the UK market alone for our exports, and there are further alternatives and options to be taken to mitigate the impact.”

The UK is certainly in need of developing new trading partners to mitigate losses caused by leaving the EU.

eate an opportunity or a threat to Cambodia’s exports

How can Asean avoid obstacles to Indo-Pacific pacts?

Construction insurance is ‘no longer an option’