Fragrant strains prove to be most popular

Cambodia’s rice sector is faced with the challenge of strengthening the quality of its fragrant rice, said Song Saran, president of the Cambodia Rice Federation (CRF), the recently appointed head of the milled rice export promotion body.

His stated task is to sell 1 million tonnes per annum by the next three years.

Saran is looking at markets in Asia – especially China – Africa and Australia as regions for growth but first must strengthen the quality and variety of rice crops and ensure there is a sufficient budget to  harvest it.

“We have to compete,” he says. “The issues we can see include climate change, lack of pure rice seeds and sometimes lack of capital to buy paddy rice,” Mr Saran said.

Cambodia experienced a decline in milled rice exports to the EU this year because of tariff duties imposed by the European Union on Cambodia’s white Indica rice. However, the loss from the EU bloc, the biggest market for the country’s milled rice, has been replaced with increasing export to China and other new markets.

Figures from the Secretariat of One Window Service for Rice Export, showed that Cambodia exported a total of 514,149 tonnes of rice to 59 countries and regions during the first 11 months of this year, up 3.4 percent over the same period last year.

Cambodia shipped 174,397 tonnes of rice to the European market during the period, down 26 percent, the report read.

On the other hand, Cambodia exported 205,358 tonnes of milled rice to China during the first 11 months of 2019, up 34 percent over the same period last year, according to the report.

China was still the top buyer of Cambodian rice during the January-November period this year, with exports accounting for 40 percent of the Kingdom’s total.

The drop in exports to the European market came after the EU imposed duties on Cambodian rice to protect European producers.

Saran said exports of cheap white milled rice to the EU fell but, at the same, the amount of more expensive fragrant rice increased.

“Despite tariff duties, our fragrant rice still stands out there. Currently, the fragrant rice in the EU market has increased. The sort of rice declining in the EU is white rice. If we continue producing and try to export this kind of rice, our farmers and millers will face difficulties,” Mr Saran said.

“Rice exports declined [in the EU], but only the cheap rice. We increased the amount of fragrant rice which means we increased the value of exports our country’s economy,” Mr Saran said.

“Learning from this trend of demand for fragrant rice, Cambodian farmers should focus on planting this variety ,” Mr Saran said, adding that farmers should ask the government to help provide pure rice seeds with well-known sources to farmers for planting.

The CRF also encourages farmers to form agricultural cooperatives so it is easier to develop contract farming with exporters and processors to maintain the market, remain up-to-date regarding information related to the markets and to keep s steady price for agricultural products.

Mak Soeun, deputy director-general of agriculture at the Ministry of Agriculture, Forestry, and Fisheries, said that the ministry has researched many rice seeds to make pure varieties for distribution to agricultural cooperatives and farmers.

The Cambodian Agricultural Research and Development Institute has worked on finding the best seeds, Soeun said.

According to the CRF, the price of rice is $680 to $720 per tonne of fragrant rice in the second harvest season, which starts from December to January next year.

Saran said the current price of milled rice in international markets decreased about 10 percent compared with the first harvest season, from July to August, when the price was $750 to $780 per tonne.

To help rice millers to buy paddy rice from farmers in the harvest season, the government has disbursed $50 million twice this year, aiming to keep the price down and to avoid the export of good quality paddy rice to neighbouring countries through rice traders in case local rice millers lack the capacity to collect paddy rice because of insufficient capital flows.

Kao Thach, director general of the state-run Rural Development Bank (RDB), said that the programme of keeping the price of paddy rice steady was started in 2016 through emergency loans to rice millers to buy paddy rice each season and for them to build rice facilities including warehouses and silos.

The government provided $50 million earlier this month as capital to the RDB, renaming it the Rural Development and Agriculture Bank and making it a commercial enterprise to disburse cash to rice millers.

The first $50 million of disbursement started in mid-2019.

The aim is to raise the price. Before the $50 million was disbursed from the government, the price of paddy rice in some areas was below 900 riel ($0.23) per kilogramme. After the announcement, it increased to 1,000 Riel per kg and even more than 1,000 riel per kg in some areas. The current price gives farmers a much greater margin,” Mr Thach said. 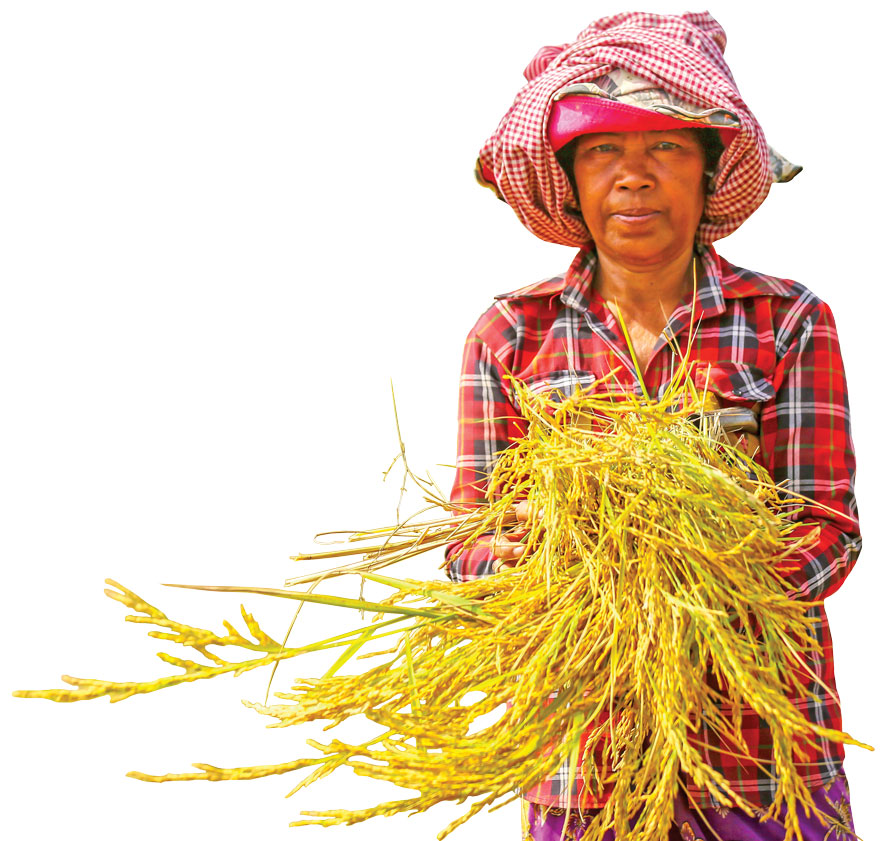 Cambodia has a quota of400,000 tones that China allows Cambodia to export. According to the CRF, the quota will be implemented from early 2020.

Cooperation with China is good, enabling export amounts to increases by 34 percent as of November  2019 compared with the same period last year, Mr Saran said, adding that almost of 80 percent rice export to China is fragrant rice.

Cambodia’s rice ranks fourth among rice exporters to China out of 12 countries, according to Saran.

“With 18 new rice millers, there is the capacity to mill and export up to half  a million tonnes so if China places new orders, we are able to export it to them,” Mr Saran said.

“The CRF has requested the government to disburse emergency loans because we have markets already. If we have a  budget for buying paddy rice, I think that the processing and milling will fill the quota as mentioned in accordance with the agreement the two government signed,” Saran said.

“This year, China imported from Cambodia 205,000 tons of milled rice. We hope that in 2020, the figure will increase,” Soeun said.

With the emergency loans from the RDB, main rice producing areas including Battambang, Kampong Thom, Prey Veng and Takeo have enough rice facilities such as warehouses and silos.

The capacity of a rice warehouse is 1 million tonnes and silo facilities can cope with 26,000 tonnes per day, according to the CRF.

“The CRF has re-focused its plan for a million tonnes of milled rice exports within three years by concentrating on fragrant, sustainable and organic rice,” Mr Saran said. “In the EU, we are trying to diversify rice exports. We do not focus on exports of only one rice variety.”

Soeun, from Ministry of Agriculture, said that the ministry is preparing a policy for organic agricultural practices. We are applying the organic standard of Cambodia,” he says.

“Cambodia’s organic rice ranks fifth in the EU and we are committed to competing to become number two or number three there,” Mr Saran said.

For Saran, although facing a number of issues that need to be addressed and enhanced, Cambodia’s ambition of exporting 1 million tons of milled rice would be within reach.

“We designate fragrant rice for promoting exports, which we register under the trademark Malys Angkor. Our rice is quality – our fragrant rice has won the world’s best rice award four times,” Saran said.

Cambodia Securities Exchange-listed Phnom Penh SEZ Plc is expected to see a 50 percent boost in non-land revenue by 2023 by shifting its business model to more service-based, and setting up its new special economic zone (SEZ) in Poipet.