The project also positions the group as another gaming powerhouse in Asia Pacific, further securing its footing on the competitiveness of the group.

Established in 1994, the group’s first casino NagaWorld has seen its market capitalisation grow more than 12 times to some $6 billion from $441 million since Nagacorp’s listing in October 2006.

In the past 24 years, the group has raised the international economic profile, attracted foreign direct investment, enhanced tourism and contributed to the socio-economic development of Cambodia.

Moody’s affirmed the B1 corporate family rating of Nagacorp in keeping with its dominant position of its integrated casino and hotel complex in Phnom Penh. This is underpinned by the casino licence, and the company’s record of a strong operating performance since its listing despite economic challenges and rising competition in the Asian gaming sector.

S&P Global was quoted by Malaysia’s The Star newspaper as saying that it expects the project to enhance the company’s scale and operating performance without significantly straining its cash flow leverage.

Moody’s also affirmed the B1 senior unsecured rating of the company’s US dollar bond issuance. The bonds are unconditionally and irrevocably guaranteed by the major operating subsidiaries of Nagacorp.

The affirmation is based on Nagacorp’s strong performance and Moody’s expectation that key risks around Naga 3’s $3.52 billion development cost are sufficiently mitigated.

The outlook on the ratings remains stable on the grounds that the company would carry out its expansion plans in a prudent manner while maintaining solid financial metrics and liquidity over the next 12 to 18 months.

“We also expect the company to have sufficient resources over the next three years to fund 50 percent of the development cost, with the remaining share funded through equity contributions from Nagacorp’s controlling shareholder, Tan Sri Dr Chen Lip Keong, who has track record of providing funds for Nagacorp’s previous expansions,” says Moody’s vice president and senior credit officer Jacintha Poh.Malaysia-born Chen founded Nagacorp and is its majority shareholder with an approximate 66 percent stake as of April 15, 2019.

Poh says beyond 2021, the company’s capacity to fund its portion of the development cost, without incremental borrowings, will depend on the company’s ability to refinance rather than repay all maturing debt, and generate free cash flows of around $270 million per annum.

Nagacorp’s mixed development project comprises two 66-storey and two 53-storey hotel towers, a 55-storey condo-hotel tower, 12-storey multi-entertainment podium, and a three-level basement. It will be sited just next to the existing properties on the former White Building land and an adjoining land, measuring a total of 16,837 square metres. Construction is expected to take place between September 30, 2019 and September 30, 2025.

S&P Global feels that the total capital spending including maintenance capital expenditure, refurbishment of the Naga 1 gaming complex, and the capital outlay for Naga3 would be about $500 million in the next two years.

It estimates Nagacorp’s earnings before interest, tax, depreciation and amortisation (EBITDA) would rise gradually to $900 million by 2021 from $300 million as of December 31, 2018. 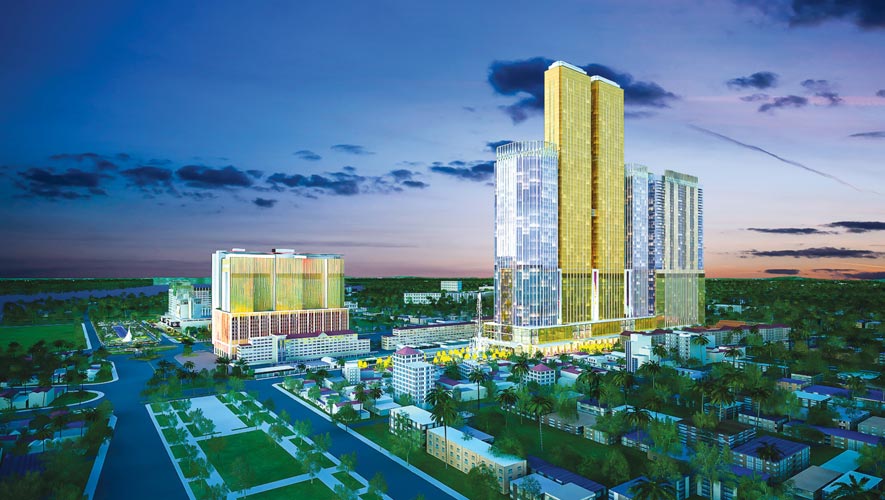 “The risks associated with the development of Naga 3 are mitigated by the guaranteed maximum sum design and build agreement with Chinese-owned CCAG Asia Co Ltd, which undertakes to deliver a fully completed and operational Naga 3 that will allow the company to commence operations upon handover.

“CCAG’s successful track record of completing both the Naga 1 and Naga 2 projects, and an arrangement with its controlling shareholder, which will cover any cost overrun, further support the development,” Moody’s says.

Similarly, S&P Global opines that Nagacorp has financial headroom to accommodate the additional capital spending for Naga 3 while continuing to pay high dividends, likely to be $250 million to $300 million annually over the next two to three years.

Nevertheless, it maintained a net cash position with a low gearing ratio of 0.6 times as at December 31, 2018, illustrating increased confidence towards the group’s financial strength, corporate governance and ability to provide world-class entertainment, and hospitality products and services.

S&P Global believes that Nagacorp would continue to pursue an aggressive expansion policy, particularly with the announcement of Naga 3 project just 15 months after commissioning Naga 2 amid the completion of its integrated gaming resort project in Vladivostok, Russia.

Having considered the uniqueness of a casino monopoly in the heart of a capital city and a successful operation for the past 24 years, the group’s vision of building the Naga 3 project with 4,720 bays over a gross floor area of 544,801 square metres satisfies 4.7 percent of the total estimated additional hotel rooms of 100,000 required by the Tourism Ministry by 2028, paving the way for more success.

Naga 1 has 755 keys while Naga 2 has 903 keys. The hotel room occupancy of the existing NagaWorld complex has risen to 86 percent by March this year.

“We believe that the launch of Naga 3 is not only timely but certainly the answer to future capacity problems, and a way to continued earnings growth, especially after the ramp-up of Naga 2,” Nagacorp filing reads.

The expansion project showcases a lifestyle product consisting of gaming and non-gaming spaces, and amenities that are not available at Naga 1 and 2 such as hi-tech virtual reality interactive indoor theme parks, shopping and MICE (meetings, incentives, conferences and exhibitions) facilities.

The largest floor area among the three, Naga 3 will house different hotels, and is expected to be managed by one or more well-known international hotel brands.

“The views of the park and the Mekong River together with the management excellence of one or more international hotel brands will anchor and define this resort. The company anticipates that these branded resorts will feature the finest quality of any hotel in Asia,” Nagacorp says.

The hotels would incorporate affordable rooms, luxurious suites and penthouses, and lanai pool suites. Villas would be constructed within the towers to provide Phnom Penh a standard of luxury among the best in the region.

The condo-hotel is designed as a luxury serviced suite living at a prime location will create a semi-permanent community within the NagaWorld complex (comprising Naga 1, 2 and 3) that allows units to access all the facilities in the complex and the full range of NagaWorld’s VIP services.

In addition, the building would also feature a lobby zip line ride, underground connection with Naga 1 and 2, and a casino cell concept within the 12-storey podium block.

Nagacorp says the block is designed as a lifestyle product utilising the casino cell concept that would have more than 90 percent of non-gaming space interspersed with gaming space.

It will carry the signature of Chen’s vision who made the concept financially successful in Asia. The concept involves large casino spaces broken into smaller parts, each with its own entertainment, food and beverage, and other integrated services.

It is envisioned that Naga 3 will take its place among sought-after casino destinations such as Macau, Singapore, Las Vegas and Monte Carlo as a world-class integrated resort destination offering. 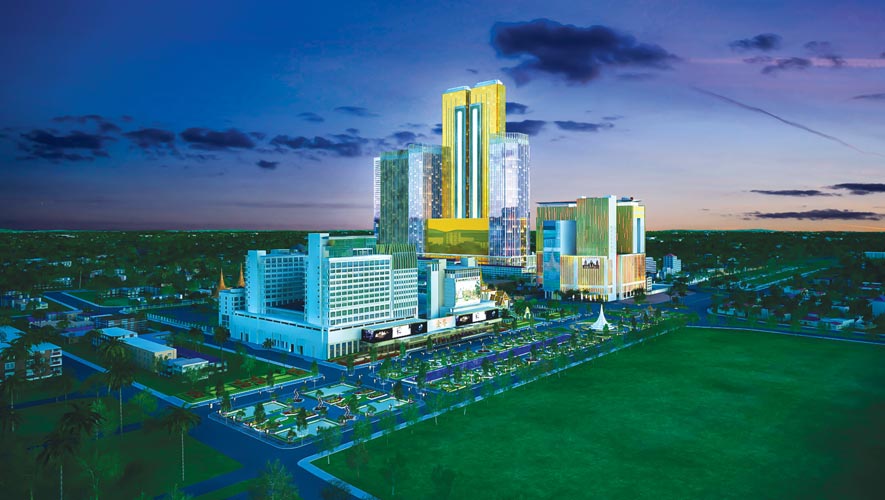 Nagacorp has the licence to operate casinos in Cambodia for 70 years till 2065. In that period, it has exclusive rights up to 2035 to run casinos within a 200km radius of Phnom Penh, except the Cambodia-Vietnam border area, Bokor and Kirirom mountains, and Sihanoukville.

The features of the casino licence include no restriction on the number of tables, electronic gaming machines and gaming space, and gaming promoter commissions and rebates.

“This allows the company to optimise the design and floor plan of Naga 3 in order to maximise its return on investment based on the company’s assessment of the gaming and non-gaming demand in the region,” it says.

Naga 3 is also well-positioned to capitalise on a fast-growing local economy with a favourable macro environment. In fact, the compound annual growth rate (CAGR) of the gross gaming revenue in Asia is expected to grow at 16 percent to $59.1 billion by 2020 after hitting $44.6 billion in 2017.

Naga 3 is able to reinvest into the economy to continue generating “win-win” private public solutions, enhance the group’s competitive position and existing operations, and that its strong earnings potential would deliver a favourable return on its investment.