Today, the city has become the “diamond of Phnom Penh”, dominated by construction projects.

With panoramic views of the city, Diamond Island Development City is home to high-end residential areas, entertainment, exhibition centres, commercial units, convention halls, and sports centres. It can house up to 30,000 people.

“We envision the island becoming an economic and tourism hub in Asean in future. We are going to make it a smart city,” says Chin Hok, chief executive officer of Diamond Island Development Co Ltd.

Currently, the island’s electricity poles are connected to a wireless network and controlled by a computer system. The company is studying ways to fit the island with CCTVs, and smart water and electricity meters.

“We are encouraging developers to build green and smart buildings. On our part, we have yet to build smart buildings as we are involved in public infrastructure works. Some projects in Koh Pich were developed by our partners, so the design and building depends on the developers,” he adds.

Hok says that OCIC alone invested in some 10 projects in Diamond Island city, adding that each project costs around $60 million to $70 million, bringing the total development cost to more than $2 billion including infrastructure.

“We have completed some 10 projects. The height of each building depends on the location. Those along the river can rise between 40 storeys and 60 storeys high,” he adds.

Safety-wise, OCIC has a strict policy on buildings which requires architects, engineers and designers to comply with international standards and regulations.

“Our engineers are trained in China, Japan and Singapore. We believe that the infrastructure can support improvements in the future. We ensure that there would be no traffic congestions although we face some issues during holidays or during celebrations outside the island,” he adds.

In terms of the sanitisation, Diamond Island has its own sewage system and sewage treatment plant to treat the water before it is released into the river. 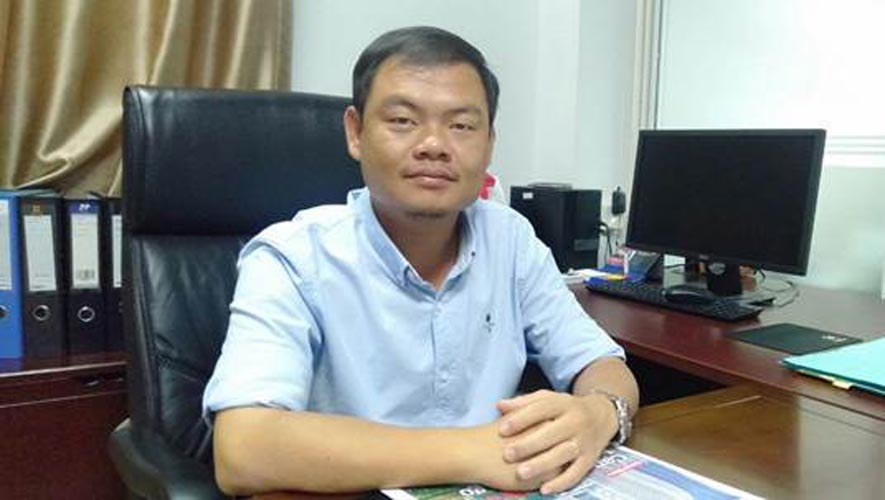 There are more than 5,000 residents living on the island where some 10 percent of 100 hectares is freehold. Residents are made up of Cambodians and foreigners including Canadians, Australians, and Chinese.

With the presence of the big development projects, Koh Pich contributes to the economy. It employs more than 2,000 workers at project sites.

Secretary of state for Land Management, Urban Planning and Construction Ministry, Lao Tipseiha says that the growth in real estate has been remarkable due to political and social stability, economic growth and foreign investment.

“The social and political stability, and firm economic growth over the years have improved people’s living standards, and made the construction and property sectors attractive. They also play an important role in job creation,” Tipseiha adds.

“We hope that in three to five years, Koh Pich development would be completed. About 80 percent of the development has been completed in the last 13 years. We are working with Japan and China to develop the island into a smart city,” Hok says.

According to Tipseiha’s ministry, from 2003 up to April this year, Cambodia has registered 257 satellite cities, and Borey projects.

On top of that, more than $2.7 billion worth of real estate projects were approved during the first four months of the year, which is an increase of 67.3 percent, a report by the ministry states.

The reports adds that between January and April this year, 1,420 projects were approved, up from 1,171 projects approved in the corresponding period last year.

Can foreigners own land in Cambodia? The short answer is No. But the Royal Government of Cambodia has eased on this restriction by allowing foreign nationals to own property via Strata Titles.