Cambodia remains one of the last Asean countries to not have a legal framework guiding e-commerce and digital contracts. That is about to change.

When the nation’s long-awaited e-commerce bill is finally signed into law later this year, as is expected, it will put to an end the country’s seven-year struggle to get a legal framework in place for the carrying out of business and the purchasing of goods online.

It will also put in place rules for electronic contracts and other online activity such as fund transfers, electronic financial transactions and other potential issues, including data protection and privacy.

“The purpose is to regulate e-commerce,” says Mathew Redell, a senior partner at the law firm Sok Siphana & Associates and vice chairman of the European Chamber of Commerce.

Private-sector individuals like Redell, who helped the government draft the law, say the new law makes no major changes, but it provides clarity and legal guidance for businesses. “There is no reason to see why it won’t be law,” Redell says.

Those involved say the new law, which still has to be approved by the National Assembly, will address the concerns of the private sector while increasing trade locally and in the region. It also opens the door for large foreign e-commerce shopping sites like Amazon and China’s Alibaba who were afraid to enter the country without this kind of legal structure in place.

Christopher McCarthy, the chief executive officer of digital marketing firm MangoTango Asia, is one of those who provided input on the legislation, along with BritCham, AmCham, the Asian Development Bank, and others. He says the foundation for the draft law comes from the United Nations Committee for International Trade Standard, the UN body whose mission it is to smooth the way for international trade. In 1996, it provided a model e-commerce law that has since been updated.

McCarthy says that although the law will benefit the country as a whole, a law on the books will also provide a great opportunity for young tech companies in Cambodia to jump ahead and create an e-commerce industry without fear.

Even without an official law, online shopping has already caught on in Cambodia. Much of the selling, however, happens over Facebook, which is by far the most used social media platform in the country.

Thousands of Cambodians are selling through Facebook even if it is not technically legal. So much so that individuals running ad-hoc Facebook and Instagram shops have even spawned an ancillary industry of logistics middlemen who bundle orders and ship them from China, thereby reducing shipping costs for sellers, McCarthy says.

But social selling has its drawbacks, mainly a lack of transparency and reliance on cash. New e-commerce companies want to change both that trend and how people shop in Cambodia.

He also hopes the law will help the online shopping market grow. “We are really happy if there are a lot of players,” Theab says. He wants more competition in e-commerce because he wants it to become normalised. “We are trying to teach people how to use it,” he says. 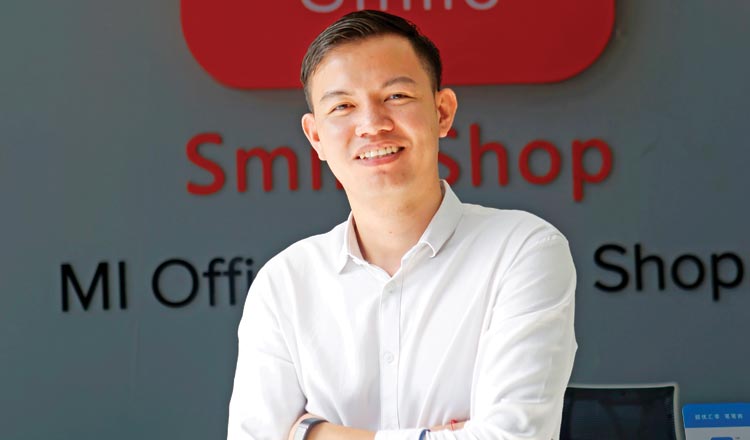 He adds that since mobile e-commerce is so new it is not uncommon for people to search the app, order, and then show up at the store to pick up their product instead of having it delivered. Mistrust has also occurred on the supply side and suppliers, who once rejected Smile Shop because they did not understand the model, are gaining confidence.

As part of the education effort, Smile Shop offers videos and guidelines that take new customers through the process with instructions on how to buy.

Bun Pak, managing director of online shopping platform Camazoon.com and founder of Pharz.com, told the Khmer Times in May that selling products through online services in Cambodia has seen rapid growth in the past three years, although no dominant player has emerged. He said a new law should help.

“I believe this trend will grow even more over the next three or four years, especially if platforms can guarantee safe online transactions, as well as accompanied by the creation of laws that oversee these business activities,” he said at the time. He added: “We strongly hope that th e legal framework is going to assist in the development of e-commerce security and small and medium enterprises operating in the tech sector.”

It will essentially create a seismic shift in how business is done in Cambodia. This includes streamlining all contracts by allowing for digital signatures in almost all transactions except for land purchases and probate.

Thorninn Sean, business management director of Prudential (Cambodia) Life Assurance PLC, says his company is moving from paper to paperless transactions, including electronic application forms. He says the banking sector has moved ahead and the digital transformation of the insurance sector is not far behind. “We don’t use paper internally,” he says.

Still, he says insurance is something that has to be explained. “Tech cannot replace human interaction,” Thorninn says.

Redell says legal clarity is the most important aspect of the law. Parties will no longer be able to deny transactions. “A contract is a contract,” he says. “The new law reinforces that point. You can’t get out of a deal because it is digital.”

McCarthy agrees. “What’s exciting about it is it makes electronic signatures valid,” McCarthy says. “Right now the only valid contract is a signature with blue ink. Now contracts can be formed online.” Digital signatures can be anything from a personal identification to a one-click system to facial recognition.

He jokes: “I personally think half the traffic [in the city] is people dropping off invoices.”

The world is about to face a divided supply chain

Some 40.6 percent of China’s imports and exports for the first two months were generated by the country’s private firms, up 1.4 percentage points from the same period last year, official data revealed.

The Gujarat International Finance Tec-City, or GIFT City, project — a special economic zone in India’s western state of Gujarat — is an endeavor by the country to join a connected global marketplace.