To keep up with the tough competition and boost the competitiveness and high productivity in the garment and footwear industry in the Kingdom, the adoption of new technology and automation in the industry are vital in this digital age, say experts.

In the Industry 4.0 era (also known as the Fourth Industrial Revolution) we are observing the progressive pace of automation and digitalisation across our factories, says Kaing Monika, the Garment Manufacturers Association in Cambodia’s (GMAC) deputy secretary-general. He adds that harnessing the technology will bring factories in Cambodia onboard the digital revolution and maintain their position as major players in the fashion industry.

He stresses that digitalisation is essential across the garment industry. Cambodia must respond to this challenge at a faster pace to transform the workplace and workforce.

Cian O’Dowd, head of expansion of global mobile clothing market place Zilingo, says that the adoption of technology in the textile sector is essential because the rate of technological innovation in clothing factories has for a long period lagged behind other sectors. “At Zilingo, we’re seeing a lot of enthusiasm from the Cambodia government and organisations such as GMAC towards tech adoption and we believe this will have a very positive effect on the Cambodian manufacturing sector, enabling businesses to grow efficiently,” O’Dowd adds. He argues technology helps the factory management team make data-driven decisions, reduces waste and enables the meeting of ever-tighter production deadlines. “We see an immediate impact on factories that adopt our technology. Some of our factories report a 50 percent decline in repeat clothing defects after deploying our quality control module. This is huge when you consider that fixing a defective garment takes two to three times the amount of time it takes to make the garment in the first place,” O’Dowd adds.

“We’ve seen overall factory efficiency improve by 10 to 15 percent in partner factories, which is huge in a sector in which margins are in the single digits. There’s no doubt that technology helps drive a healthier margin which enables management to invest more in the factory and its workers,” he maintains.

GMAC Operations Manager Ly Tek Heng, says now the industry revolution has come to 4.0 from a being a manual operation. He says that today technology is more advanced. Ly adds that in order to  increase production, efficiency and sustainability, Industry 4.0 is employed. 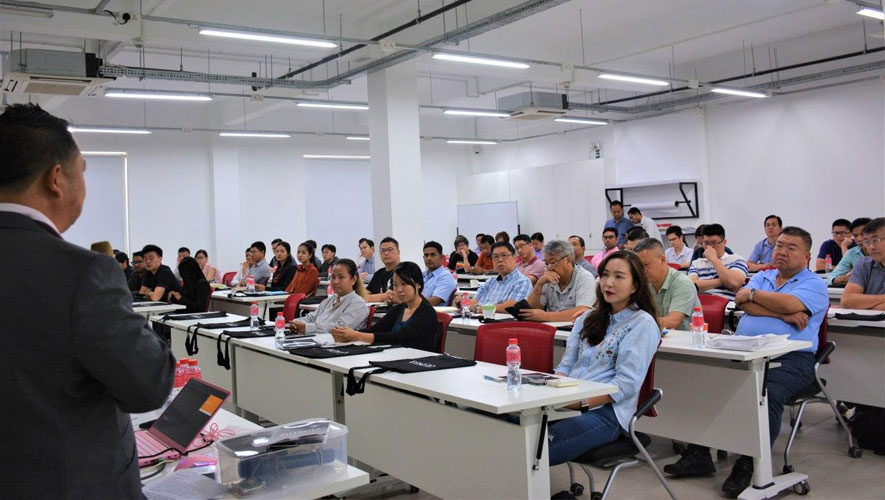 The introduction of the software is part of Zilingo’s plans to make Cambodia a key market, with a vision to empower fashion businesses with unprecedented access to a transparent supply chain.

“Zilingo introduced the new system – new technology and practices – to help factory operators to enhance their production. It manages the orders and operations in the factory. If we deal with clothing, it records the process from basic cloth as far as the finished products. The system will track the entire process. It will spot errors on each production line, so they can be fixed immediately,” said Ly.

“Now we use smart phones, we can download the relevant app onto the phone, so we will know what is going on in the factory, the complete work, and any errors. It captures real-time production in the factory. The system can provide a weekly or monthly report on the workplace and production,” he added.

The discussion on the Fourth Industrial Revolution and its effect on the country’s manufacturing sector took place as the Kingdom grapples with the possibility of losing its Everything but Arms (EBA) trade agreement status with the European Union, the biggest importer of Cambodian garments.

The experts agreed that digitalisation and automation in the manufacturing sector will make Cambodian products more desirable abroad, contributing to the country’s long-term economic growth. However, they expressed concern that this wave of automation could result in the loss of thousands of jobs to machines.

Zilingo, founded by Indians in Thailand and now headquartered in Singapore, provides global fashion technology and leading solutions that allow factories to maintain their position as major players in the fashion industry.

O’Dowd adds that technology can have a massive impact on the human workforce in the garment industry. Zilingo’s factory software helps factory owners identify their best performing production-line staff who, in turn, can be rewarded and recognised for their talents. On the other hand, staff who are struggling can be identified and receive additional training and support.  “Our defect software allows workers to get instant feedback from the first time they make a mistake. This allows them to fix their errors from the first instance and perform better at their job,” he added. He points out there is a big fear in the sector that technology will replace workers, but that’s not the case.

Technology merely helps workers operate more efficiently and allows them more time to work on more skilled tasks, which provide greater added value to the company. “In the short term, our factory QC (quality control) tool reduces the number of QC and administration staff required because white boards and paperwork are replaced by real-time data captured by tablet computers and displayed via monitors. We envision a future where middlemen are removed from the fashion supply chain because factory owners and clothing brands have access to more data on material and production costs,” ODowd adds. Ly, however, adds that GMAC has invited Zilingo to share its new technology system in garment, shoe and bag factories. He said that when the GMAC’s 600 members use this technology, it will help with competitiveness and productivity.

“We do not have the details of the percentage benefits that can be added from this technology because it is new and we have to use the system first. However, this system has been used by India, Sri Lanka, Indonesia, Vietnam and Bangladesh,” Ly said.

He is optimistic that when companies use this technology for at least two years, they will get to a break-even point and cover the initial cost of the technology investment. Phan Phalla, undersecretary of state at the Ministry of Economy and Finance, said Cambodian policymakers are focusing on ensuring the nation is in a good position to reap the benefits of recent technological advancements. He said the government aims to ensure the country can adapt and transform in line with changes in technological trends while minimising the social and economic costs of transitioning into a more technologically advanced economy. “The Fourth Industrial Revolution may bring common opportunities, including increasing wealth, productivity and acting as a powerful force for economic inclusion,” he said.

He said that new technologies – particularly artificial intelligence, robotics, virtual reality, blockchain technology and three-dimensional printing – may provide less developed countries an opportunity to leapfrog economically, bypassing traditional phases of industrial development. “New technologies present some serious challenges for all countries, such as the prospect of job losses, increased unemployment among lower-skilled workers and cyber-attacks that could prove just as damaging and costly as a physical attack on the nation,” Phan said.

“Preparing for the digital economy and responding to the Fourth Industrial Revolution is one of the major priorities of the Royal Government in the next mandate,” he added.

The COVID-19 pandemic has laid siege to Cambodia’s garment industry. Capital Cambodia investigates the unravelling of the sector and asks what the future holds for its beleaguered workforce