Economic growth is expected to continue its robust trend in the coming years, albeit a slight moderation to seven percent in 2019 from 7.3 percent gross domestic product (GDP) projected for last year.

Cambodia’s GDP would remain around seven percent for the next few years and abate to six percent as a result of slowing domestic credit and real estate cycles in the context of tighter global financial conditions, according to International Monetary Fund (IMF) Article IV Consultation with Cambodia report last December. 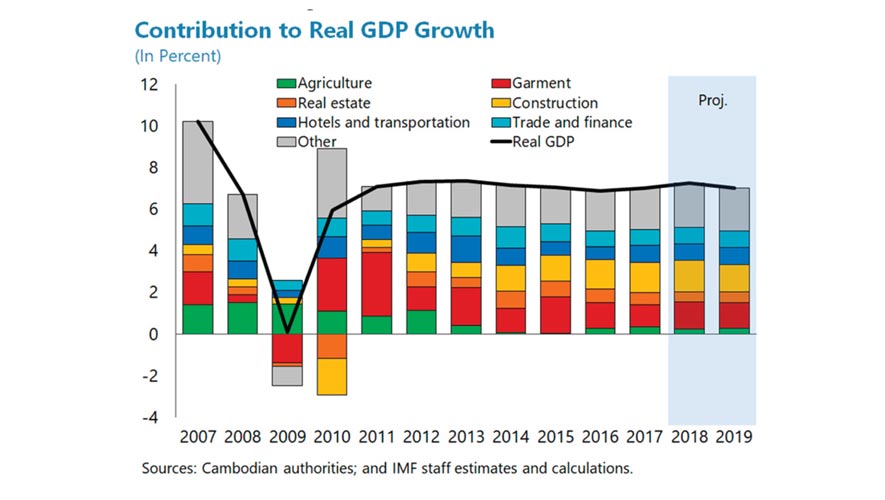 Based on its staff appraisal, including its resident representative Yong Sarah Zhou, of the Kingdom’s economy, the outlook on economic activity is subject to downside risks, such as those stemming from elevated financial sector vulnerabilities, and external risks related to tighter global financial conditions, international trade sanctions, and spillovers from global rise in protectionism.

As for external risks, IMF notes that effects from global rise in protectionism or trade sanctions could hamper exports and foreign direct investment, denting confidence.

The negative impact of higher US trade tariffs on China could be mitigated by trade diversion that could see further garment-related foreign direct investment (FDI) inflows.

But, weaker than expected growth in China would have significant negative spillovers through FDI, banking, and tourism channels.

A growth slowdown in advanced economies or stronger-than-expected US dollar could reduce garments exports and tourism.

According to the team which prepared the report, there was broad agreement by the Cambodian authorities regarding the macroeconomic outlook and risks.

“The authorities aim to sustain growth at seven percent. While agreeing on the need for structural reforms to achieve that goal, the authorities argued that large infrastructure projects in the pipeline would boost growth. “They emphasised efforts to mitigate the build-up of financial vulnerabilities. The authorities also remain cognisant of growing risks from a tightening in global financial conditions, weaker than expected global growth and a further deterioration in China-US trade relations,” the report notes.

IMF finds that capital continues to flow into the construction sector driven by regional investors and strong demand for residential and retail space. But, significant data gaps, including property prices, complicate the assessment of risks.

“There is anecdotal evidence that growing oversupply is dampening prices of high-end apartments, while given the segmented nature of the market, property prices for retail and residential properties remain robust. As a result, affordability of residential housing is being eroded. Credit growth to the real estate sector, a key transmission channel linking credit and economic growth, has averaged around 35 percent since 2016, driven by few banks,” it states.

IMF recommends that the authorities moderate the credit cycle where priority is given to targeted measures, such as raising risk weights for real estate-related lending to be in line with banks’ risk profiles. It also asks that reserve requirements on foreign exchange liabilities are raised, including for microfinance institutions, as it would increase the liquidity cushion and help promote local currency use.

IMF says reporting requirements for construction activity and sales should be strengthened. Lending by real estate developers should be monitored and regulated in line with other non-bank credit providers and bank exposure contained.

It says the authorities should consider tightening new construction project licenses, apply stricter monitoring of official bank guarantees and raise the minimum capital to be deposited in a local bank by developers.

Property tax reform, including a phased increase in recurrent property tax rate, could help stabilise real estate prices over the cycle and improve transparency and governance of real-estate markets.

IMF says Cambodia needs to safeguard fiscal sustainability. Revenue growth is expected to slow with absent tax policy reforms, as past revenue mobilisation reforms mature. It adds that international trade taxes are projected to decline as import tariffs are reduced and grants fall as the middle-income status is solidified. 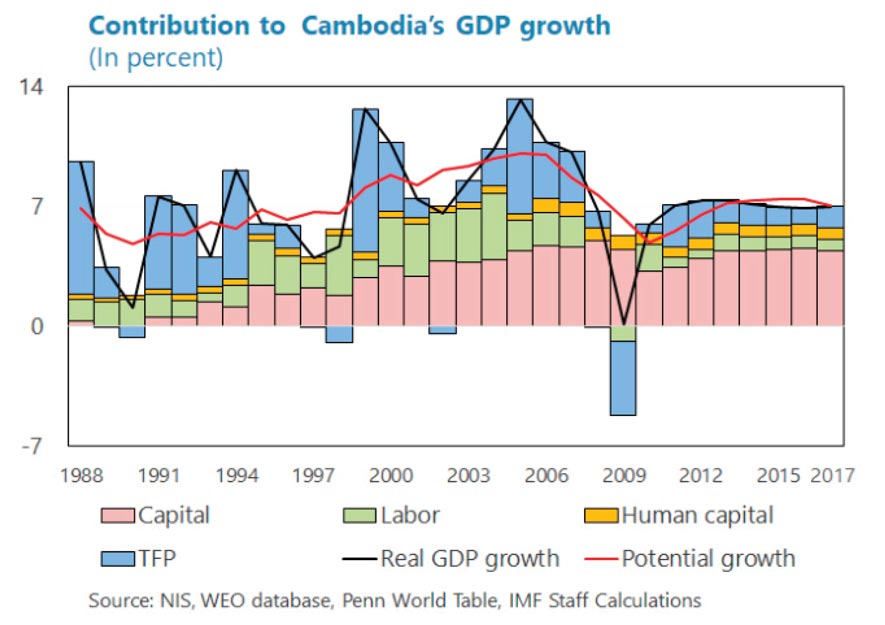 In order to support growth and sustainable development that is in line with the authorities’ National Social Protection Policy Framework (SPPF), the composition of public spending should be re-orientated towards infrastructure and development spending.

“These developments would place a greater burden on domestic financing, with government deposits projected to decline to around seven percent of GDP, close to the estimated floor at 6.5 percent,” it says.

As such, it recommends that the Cambodian government restrain current spending, raise revenue while making taxes more efficient and progressive, introduce a medium-term fiscal framework, and support inclusive growth.

IMF says public debt is currently low at just over 30 percent of GDP. While external loans and the share of public private partnerships (PPPs) in public investment are expected to increase, Cambodia remains at low risk of debt distress.

Risks stem from the materialisation of contingent liabilities as well as export and growth shocks.

However, it notes that the authorities are developing a public debt management strategy (PDMS) that should highlight prioritising access to concessional and semi-concessional financing.

“Cambodia should only rely on borrowing from international markets on commercial terms if confronted with shocks that exceed available buffers,” the organisation adds.

Better managing contingent liabilities requires developing a risk management framework that limits the present value of guaranteed payments, strengthens the institutional framework for PPPs by introducing a formal gateway process and ensuring that PPPs are subject to the same planning process as other public investment projects.

It should also ensure that the Economy and Finance Ministry and National Bank of Cambodia work jointly to monitor contingent liabilities from PPPs and the financial system.