However, from a cognitive perspective, to a considerable extent, Wuhan pneumonia can be considered as a kind of serious flu.

Flu is a loose term for upper respiratory tract infection. It can be divided into two categories, namely viral influenza (such as upper respiratory tract infection caused by Influenza virus, Adenovirus, Rhinovirus etc) and bacterial influenza (such as bacterial pharynx tonsil inflammation). There are quite a number of viruses that cause influenza, including Rhinovirus, Parainfluenza virus (which is not the same as Influenza virus), respiratory Syncytial virus, Echovirus, Coxsackie virus, Coronavirus, Adenovirus and others. Although Coronavirus is generally considered to be one of them, certain molecular biology papers and scientific research believe that they are not the same. However, from a cognitive perspective, to a considerable extent, Wuhan pneumonia can be considered as a kind of serious flu.

Influenza has always been a seasonal infectious disease that plagues the world. According to the World Health Organization, influenza affects 5 percent to 10 percent of adults and 20 percent 30 percent of children worldwide yearly, which is about 1 billion people. Most cases are mild, although the severe ones can go up to 3 to 5 million, with 290,000 to 650,000 resulting in fatality. Since influenza viruses are susceptible to constant mutation and, hence, difficult to predict, this leads to an everchanging epidemic situation each year. As such, the complexity and difficulty pertaining to influenza prevention and control work are some of the major long-term major public health concerns worldwide. China has also set up a specialised influenza surveillance centre and network for this purpose, in order to prevent the spread of influenza and viruses.

Unfortunately, some important signals for disease transmission were clearly ignored.

Researchers at Anbound Think Tank noted that, from 2018, the number of flu outbreaks in China began to rise abnormally – and at an alarming rate at that. 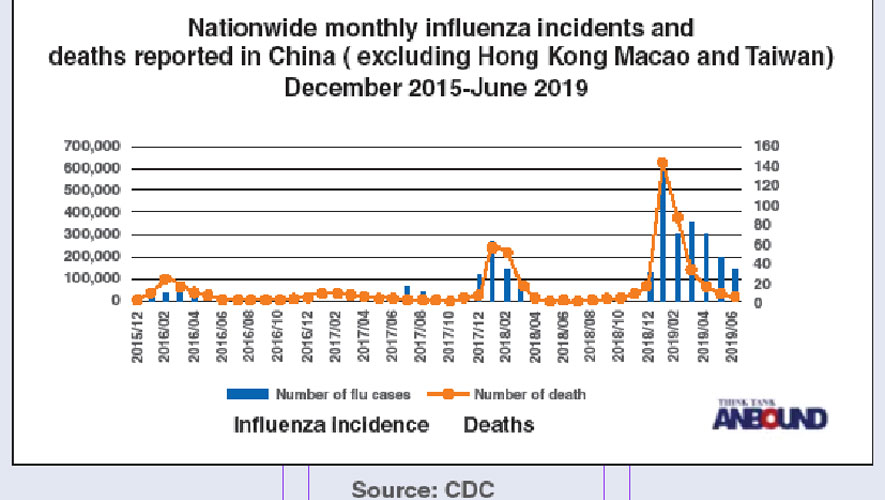 Data tracing back to December 2017 from the Chinese Center for Disease Control and Prevention (CDC) showed that the number of flu cases in China had risen unexpectedly. Even when considering the seasonal outbreaks of Influenza virus during winter, the number of infected patients in December 2017 was estimated to be 120,000, a 400 percent increase compared with the same period from 2016. Using the influenza outbreak data evaluated from December to March of the current year as a basis for comparison, the total number of cases in 2015-2016 and 2016-2017 is in the range of 100,000 to 150,000. In 2017-2018, the number of infected people reached a staggering 600,000; in 2018-2019, it was about 1.4 million.

Looking at the statistics, the diseases caused by the virus have begun to demonstrate abnormalities beginning in 2018. According to data from the National Health Commission of China (NHC), influenza cases in 2019 spiked by 143 percent and the number of incidents exceeded 600,000. With comparison with data from previous years, particularly in 2016 and 2017, there were 23,300 and 30,100 cases, with six deaths. As for major influenza outbreak, the number of cases reported in January 2018 was approximately 273,900, with 56 deaths reported. From the data alone, the viral flu has increased dramatically beginning 2018, by tenfold and in 2019, the viral flu has increased significantly, thirtyfold to be specific, which signified that the virus that caused human infections  must have undergone “multiple” mutations so much that it has now overcome the countermeasures of which existing medical technologies are capable.

The situation had been brewing since 2018. Looking back at it now, there was certainly the need to reassess and analyse the crisis further. Although the NHC has repeatedly issued warnings, it was obvious that the complexity of the situation was underestimated in terms of the current scale of infection and damage. The science of epidemiology has a certain inherent theoretical framework in its cognitive conclusions. In normal circumstances, it is reliable, but it cannot cope with mutations of the virus and thus could not provide a clear, predictable and early warning. Subsequently, the patterns shown by the data were ignored, which ultimately led to a subsequent outbreak of pneumonia in Wuhan.

The conclusion is clear. First, the NHC actually issued the relevant warnings earlier. Second, the NHC and relevant experts underestimated the scale, extent and impact of the influenza infection. Ignoring such obvious crisis signals is a huge and terrible mistake. In a country with a large population and limited resources, China should strengthen its institutional buildup in the future to truly resolve the problems.

‘Trashing’ it out: Waste management across Asia

‘Polluted air’ could be an important cause of Wuhan pneumonia

What are the pros and cons of purchasing an established home versus an off-plan property?

Last week was yet another turbulent week for global stock markets, with the worst one days sell off since Black Monday in 1987 occurring on Thursday, March 12,  and the worst week since 2008.