Unlike its neighbours Thailand, Vietnam and Malaysia with less than five home-based airlines, the 16 million-population Kingdom has some 10 airlines registered, engaged in an unspoken clamour for capacity, profitability, and downright survival.

The aviation environment in Cambodia is nothing short of puzzling. Unlike its neighbours Thailand, Vietnam and Malaysia with less than five home-based airlines, the 16 million-population Kingdom has some 10 airlines registered, engaged in an unspoken clamour for capacity, profitability, and downright survival. This situation is exacerbated by competition and price war from regional and international airlines that make round-trips to major cities in Cambodia. Up to 2018, 44 commercial airlines comprising local and international companies serviced 77 routes via Cambodia’s Phnom Penh, Siem Reap and Sihanoukville international airports.

This year, three local airlines – Galaxy Airlines and Maritime Airlines, and Cambodia’s first air freighter Southeast Asia Airlines, will join the club. They have received the initial principle approval and are awaiting approval for the airline operation certificate (AOC). Two others airlines, Prince International Airlines involved in general aviation such as helicopter and private jet charter services, and MJ Airlines, which is working out its dry lease agreement, would start operating this year. This brings the total sum of airline start-ups in Cambodia to 19 which consists of commercial airlines and three helicopter services.

“The sector is robust and we are afraid it is reaching a parabola (but) we cannot stop it. The market will have to correct itself,” says Sinn Chanserey Vutha, deputy director-general of State Secretariat of Civil Aviation (SSCA).

Airline operation is almost never on cruise control, it is vulnerable to numerous “turbulence” such as low load and yield, price dumping, jet fuel price, strict financial and safety regulations, and air crashes. Yet, the big capital sector draws a steady stream of interest among cash-rich investors despite the knowledge of unprofitability in the first five years, to say the least. For many investors, it is a status symbol, an object of pride, wealth and power.

According to German online market researcher Statista, global commercial airlines are expected to generate a combined revenue of some $855 billion in 2019. It states that between 2009 and 2017, revenue in the global aviation industry grew at a compound annual growth rate of around 5.9 percent, reaching $754 billion in 2017 on rising number of air cargo and passengers, and fuelled by a world that is becoming more affluent and interconnected.

Still, the feel-good factor has yet to hit a sweet spot in Cambodia. A quick search online shows that nearly 22 airlines have closed shop in the past three decades. Some airlines even packed up within six months to two years of setting up such as Apsara International Air (2014-2016), Tonle Sap Airlines (2011 to 2013), President Airlines (1997-2007), First Cambodia Airlines (2004), Mekong Airline (2002), unable to stem the bleeding.

The sector’s growth often involves greenfield investments as evidenced by the present operators. A majority of these start-ups comprise Chinese investors who are making their money in property development such as the Prince Group, JC (Cambodia) International Airlines Co Ltd, and MJ Airlines, and or are travel companies.

The latest boom in airline operators started just after the general elections in 2014. Although considered positive, particularly on the back of a sustainable year-on-year economic growth, the industry remains wary. The fear is real if subtle, as some of these airline start-ups rapidly fail as going concerns likely due to hasty expansion, weak financial management, and experience. For instance, among local airlines, low-cost carrier KC International Airlines Co Ltd has ceased operations whereas Cambodia Bayon Airlines is filing for bankruptcy and Small Planet Airlines (its parent, Lithuania-based Small Planet Airlines UAB) has gone into receivership. Bassaka Air Ltd, on the other hand, has downsized its scheduled flight operation to charter services. 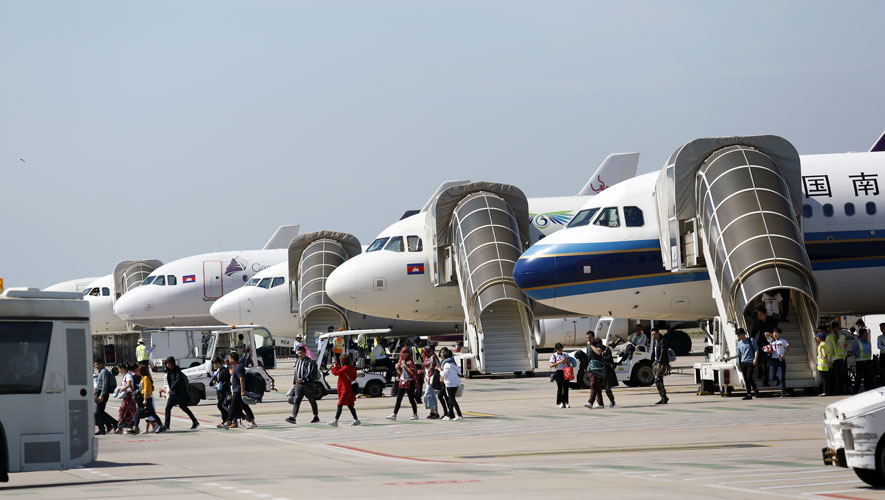 “We keep stressing to investors that their business models must be financially fit. It must include proper cost calculations that can sustain them beyond three years but that is not always the case,” says Vutha. Experienced industry players are aware that oft-times, in the first three years of an airline start-up, investors are bound report losses and perhaps, breakeven a few years later although losses remain. Profitability might only kick in after five years, if that.

At present, there are around 40 aircrafts in the sector and airlines commit to adding one aircraft every year but that need not be the case as it depends on supply and demand. In fact, the increase in aircrafts does not correspond with the carrying capacity particularly in the domestic sector. “It can result in a negative effect where airlines face financial constraints, arising from operation cost and other costs if it increases the number of aircrafts too soon,” he adds.

“For Cambodia, we have domestic airports but the three destinations cannot feed the airlines. I give you an example, in one week or a day, we have 150 to 200 passengers travelling to and from Phnom Penh and Siem Reap. If you compare this number to the seats on an Airbus 320, which has a maximum capacity of 200 seats, you have basically covered one flight. Today, there are roughly 10 flights (by different airlines) flying domestic daily. Do you know what that means to the load factor? We don’t have the market compared to Thailand, Malaysia or Indonesia,” Cambodia’s national flag carrier Cambodia Angkor Air chairman Tekreth Samrach tells Capital Cambodia.

“So we don’t focus on the domestic market. If we did, we might (have) closed down in the first three to four years (of operation),” he adds.

Despite being an open market economy, which does not discourage airline start-ups, the image of the Cambodian airline sector is negatively viewed by aviation players. One of them is aircraft lessors, who exercise caution over local companies that want to lease planes. The lessors are afraid that the companies, based on Cambodia’s sector track record, might become bankrupt.

The recent consideration by Cambodia to tighten its regulatory regime and legal system in a move to accede to the Cape Town Convention which talks about lease protection and aircraft purchase is welcoming but that could take years before a framework is implemented. Aviation news publisher AIN Online states that as of February, 75 countries have acceded to the treaty including five Southeast Asian nations—Singapore, Malaysia, Vietnam, Myanmar, and Indonesia.

“Cambodia is considered a risk country as it has not acceded to the convention but is home to many airlines. This makes aircraft financiers or lessors careful. Aircraft leasing is a lucrative business but if their client’s business goes bust, it is difficult to recoup the losses. With the convention, there is a guarantee on the deal and aircrafts can be re-possessed,” Vutha says.

Samrach says prior to 2014 elections, investors were biding their time to invest. The airline’s predecessors were Air Cambodge and Royal Air Cambodge that operated between 1970 and 2001. The government owns a majority stake of 51 percent and the remaining interest by Vietnam Airlines. In the 1990s right up to its cessation in 2001, Royal Air Cambodge, which partnered with Malaysia Airlines (49 percent stake), experienced nearly $30 million losses as passenger movements dropped on the heels of the Asian Financial Crisis and the September 11 terrorist attack.

“The investors saw what happened to Royal Air Cambodge in 2001. We had a few airlines then but they left and no one wanted to come back. When Angkor Air began to grow, they said ‘wow’, and figured it was time to set up an airline here,” Samrach adds. But, he stresses that not many can reasonably operate a business model as Angkor Air’s. To be sure, the airline is purely involved in transporting passengers with no additional revenue stream from non-aeronautical services. For starters, being state-owned sets itself apart from the others and its added partnership with experienced industry player Vietnam Airlines ensures that it has an edge over others.

Clearing the runway for future growth

To survive though, airlines must diversify its routes and business model. “We are talking about diversifying our business to not focus on one area but multiple areas, so we diversify the economic (value),” Vutha says. He adds that it might be difficult to judge but consolidation driven by market pressure could be on the cards in future.

That aside, airlines have realised to keep their expansion plans to a minimum, focussing mostly on organic growth and prudent financial management. The attention on the Chinese market is also keeping them sway although intense competition and low capacity continue to eat into their operation cost.

Samrach says to compete, an airline must have resources such as people, network and opportunity to open doors. It does not shy away from previous years’ ventures (Bangkok route) that resulted in huge losses. Instead, it has learnt from its mistakes.

“We focus on China now, and maybe Vietnam in the long-run. We did try South Korea for a few years, and Hong Kong was hard. (Due to the experience) we decided to go to Shanghai, Guangzhou and Beijing but we will increase the destinations later. China is big,” he adds.

How will China win the final war on poverty?