Across Southeast Asia, the convenience store, or mini-mart market, has been the fastest-growing segment of the retail sector. But, in Cambodia, the rise of such stores has been slower to materialise.

Across Southeast Asia, the convenience store, or mini-mart market, has been the fastest-growing segment of the retail sector. But, in Cambodia, the rise of such stores has been slower to materialise.

In Vietnam’s Ho Chi Min City, ubiquitous Circle K and Family Mart shops dot the landscape and can be found on many streets. In Thailand, the market is dominated by 7-Eleven, which operates more than 10,000 stores across the country.

Nestled between these countries and the rival retailers that control the region sits Cambodia, a largely untapped market and the most unsaturated convenience store market in Southeast Asia. But that is all about to change, analysts and operators say. As shopper demographics shift and per-capita income increases, a major expansion by the large retail chains is expected.

Circle K entered Cambodia last year and today has 24 stores. TH CVS Co Ltd, part of the Cambodia’s TH Group, owns the Circle K franchise in Cambodia. It expects that number to increase to 40 by the end of the year and its 10-year-plan calls for 300 stores in Cambodia, a number similar to Vietnam where there are roughly 350 Circle K stores, according to Steven Yos, executive director of TH CVS.

Other major regional players such as 7-Eleven and Family Mart do not exist in Cambodia, but that could change soon. Thailand-based CP All Plc, which operates 7-Eleven stores in that country, has locked up the licence for operating in Cambodia. So far, CP ALL has not announced any specific plans for Cambodia. “I think they are studying the market,” says Aurelien Cadot, general manager of Arthemis Co Ltd, the parent company of Kiwimart Cambodia. CP ALL reported total revenues of 528 billion baht ($16.9 billion) last year. What’s driving expansion is a new and growing middle class that has disposable income for the first time in 50 years. And Circle K and 7-Eleven are not the only players. Kiwimart has 22 stores. Other retailers include Aeon MaxValu Express with nine stores, Smile Mart and Lucky Express.

“In the past 18 months, the number of supermarkets, minimarts and convenience stores has exploded,” Cadot says. Cambodia is at the beginning of what is called a “modern retail” market.

There is a slow but steady switch from traditional markets to modern markets.

What is likely to be witnessed in Cambodia follows a trend in Asia retail markets, which has gradually shifted from traditional to modern trade.

Asia’s leading convenience retailers are predicted to grow 6.6 percent a year to 2022 by $5.1 trillion, according to the latest forecast from international research organisation IGD. Based on a survey of the top 10 Asian convenience retailers, the research predicts convenience will be the fastest-growing bricks and mortar channel in Asia over the next five years, resulting from both retailers expanding their networks and people changing their habits.

Cadot calls Circle K’s Cambodia plans, “ambitious”.Yos says he wouldn’t describe the growth as aggressive. He says it is strategic and based on what the market can bear. “We would love to expand locally,” he says.

Some see Cambodia as ripe for this type of investment. Nick Miles, head of Asia Pacific at IGD Asia says a combination of low GDP per capita, a small population and a relatively small grocery market has made it tough for international retailers to expand into Cambodia. 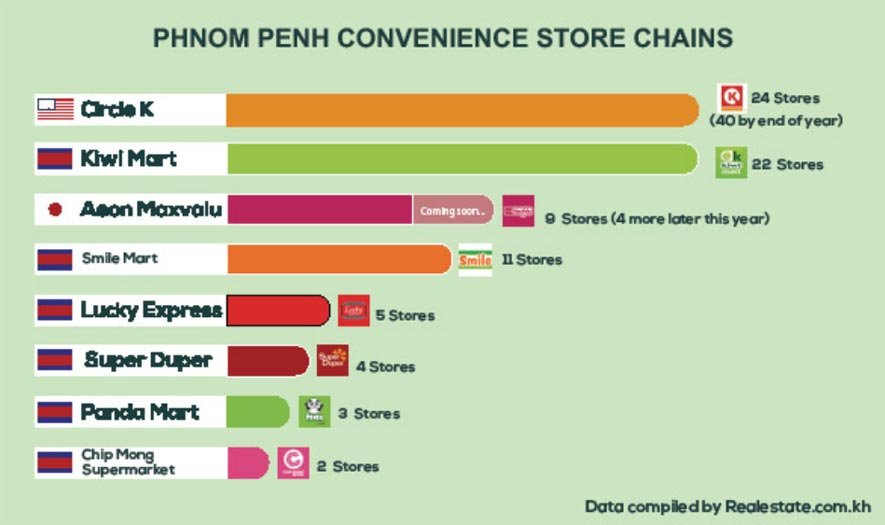 “However, as we have seen in other markets, the growth of the middle class, improving infrastructure and ease of doing business means that we forecast the Cambodian grocery market to be worth $9.3 billion by 2023, which is a growth rate of 7.5 percent. Similar to other markets, Cambodia is nearing the tipping point with retailers increasingly showing intent to expand and enter the market,” he adds.

Marketing firm MangoTango Asia chief executive officer says customers today are happy to spend, and mini-marts are a great place for that. “So what’s behind all this expansion is getting a foothold in the market before others get here. It’s a deep-pockets strategy to keep out competitors and gain a first-mover advantage.”

“The most successful strategy we see from retailers entering new markets is through partnering with a local business. Very few go it alone and succeed. Often, once a network of modern trade is established, and GDP per capita increases further we then tend to witness the growth of retail both geographically, as well as into other formats, such as convenience, where consumers are willing to pay more,” he adds.

The majority of retail purchases in Cambodia are currently made in small, family-owned shops that still make up most sales in the country, but this number is forecast to decline in the next 10 to 15 years, according to the Cambodia Constructors Association. Economic growth is expanding around 7 percent per year while per capita income is approaching the $1,500 level.

Benefiting from that growth and rapid urbanisation, the number of convenience stores in the country will soon rise, according to online publication Construction & Property.

Growth has been recorded in the convenience store and supermarket categories. It is the trend that modern retail sales account for a bigger proportion of total sales, from traditional venues such as small-scale grocery stores and wet markets.

Analysts say customers today are willing to pay a 10 to 20 percent premium at these smaller convenience shops for clean stores with higher-quality goods. Many of the mini-marts such as Super Duper also boast a product lineup on par with a supermarket, with fresh and processed foods available.

Miles says typically in markets such as Cambodia, where modern trade is in its infancy, once GDP per capita reaches a certain threshold it would see an influx of retailer investment, normally focused on hypermarket and supermarket development in major metropolitan areas.

“Retailers such as Dairy Farm, Aeon, Circle K and CP Group, through its wholesale banner Makro, have already entered the market and, in the future, we would expect retailers in neighbouring countries, such as Thailand and Vietnam, to view Cambodia as a complementary growth opportunity to their existing operations.

“With so much change affecting the grocery market globally, through the growth of e-commerce and technology innovation, it is hard to say whether Cambodia will follow a similar pathway to other markets. Online and convenience are the two fastest growth channels for grocery retail across Asia, with hypermarket growth a challenge.

Therefore, Cambodia might adopt these channels more quickly, leapfrogging traditional stages of evolution we have seen in other markets.

Over the last 12 months, Asia’s grocery landscape has continued to develop rapidly. In 2019, we expect this pace of change to continue.

Retailers will keep refining their operations to meet the growing demand for convenience; partnerships will continue to shape the future of online; health and wellness and social media are set to grow in importance and in-store technology will fundamentally change the way people shop,” Miles says.

Cadot says traditional small family-operated markets, which often sell perishable foods as opposed to the dry foods sold by mini-marts, are still very present and respond to the needs of the lower-income family. But he thinks those numbers will decline as convenience stores expand.

“Rents are becoming higher and higher and they have difficulty attracting the new generation who is looking for a more modern shopping experience,” he says.

Fragile European banking may trigger the next global crisis

Cambodia has seen a tremendous transformation of its post-conflict economy, weathering the financial crisis that gripped much of East Asia and Southeast Asia in 1997 and recovering to record a growth rate of approximately 8 percent between 1998 and 2019. A watershed moment came in 2015 when GDP reached $1,070, marking the emergence of a […]

Since it was first introduced in Cambodia, the CashVille Kidz program with animated cartoon series has had a huge impact as the Kingdom seeks to increase the level of financial literary among its people amid a booming economy.