Everything is two ways. Buddha says if you do good, you will get good. It is your karma.

For CIMB Cambodia PLC chief executive officer Yin, being disciplined and doing good to others are principles he cultivated while surviving the Khmer Rouge years.

The 62-year-old man became the bank’s first CEO when CIMB Cambodia was incorporated on Sept 20, 2010. He was seconded by parent CIMB Group Bhd, a public-listed Malaysian group, after serving in a fellow Malaysian bank, Public Bank, as its deputy general manager.

Dressed in a dark suit, a greying shoulder-length haired Yin is humble about his journey, and the growth of the bank under his watch.

Today, the bank just over eight years old in Cambodia holds a two percent market share with a 12 percent return on equity.

The first question one has in mind is how does a bank survive with the intense competition in Cambodia? Yin says there is no secret but it is all down to understanding the rules of the game.

Building on its parent company’s framework, being open-minded, transparent, allowing younger staff to speak, and his personal favourite – self-discipline, a trait he developed as a teenager, are part and parcel of the success story.

From the rice fields to banking 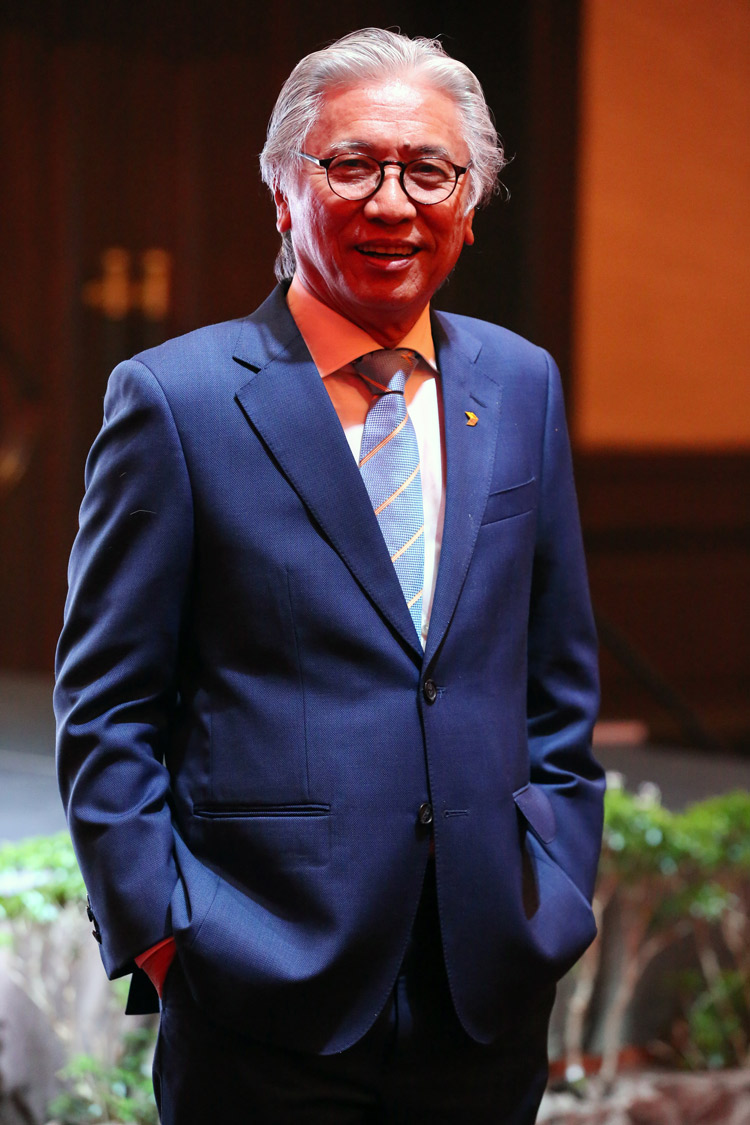 “Since school, I was inspired to be a banker. I had seen a senior banker who looked smart and disciplined and possessed integrity. In my heart, I wanted to be like that person,” he says in an interview with Capital Cambodia on a sunny afternoon in his neatly arranged office in Exchange Square.

But bad luck struck the family. Yin was captured by the Khmer Rouge when he was turning 16, and was sent to work in the rice fields some 300km from Phnom Penh, in north-east Cambodia where he spent two years pulling rice and cutting bamboo, sometimes working beside the remains of those who had died of exhaustion, malnutrition or of bludgeoning.

He gained his entrepreneurship skills during his capture by the Khmer Rouge, planting a tree that grew leaves used to overcome flies and insects during the wet season in the fields.

He says the bugs festered in the fields, prompting him to help the farmers and the soldiers overcome the problem.

“When I became a farmer, it was the wet season. There were lots of insects and to overcome this, we had to smoke in the fields. To do that, you have to roll the leaves first, This gave us some time to take a break.

“I saw the leaves as an important commodity. So I planted them myself because it was difficult to get the leaves elsewhere. I would wake up at 4am and plant it, and later harvest and give them for free. So I became a good friend (with everyone),” he recalls.

After the collapse of the Khmer Rouge regime in 1979, Yin was determined to follow his dream of working in the banking sector.

In 1981, he joined the Phnom Penh Municipality Bank, an arm of the central National Bank of Cambodia that had been re-opened only 18 months earlier. It was here Yin learnt the ropes at banking while attending classes at the government’s faculty of finance, accounting and banking between 1984 and 1987.

Yin was hired as a credit officer at Public Bank’s first intake in 1992. From there, he rose through the ranks to become deputy general manager and was subsequently head-hunted by CIMB.

A houseful of Cambodians

His joining CIMB made history in Cambodia. He became the first local to hold the highest post in a foreign bank. While it raised eyebrows, Yin says it was a signature move by CIMB, an institution that valued 100 percent local employment in foreign outposts. 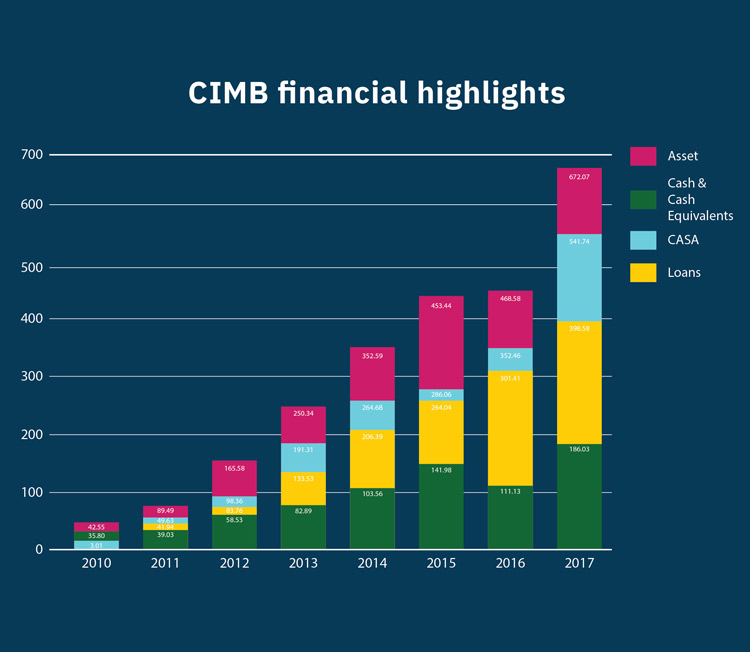 “The difference between CIMB and other banks is that we practice localisation. It is the same in CIMB Thailand, Singapore and Indonesia.

“This is CIMB’s philosophy. It believes in the locals as they have a better understanding of the market and culture. If you get a good local team, a bank would do well,” he says.

The bank, which has 13 branches in Phnom Penh, Siem Reap, Preah Sihanouk, Batambang and Kampung Chham, employs over 300 staff with diverse experience in finance, banking, hotel and telecommunication sectors.

He contends that in general, there is a limited local talent pool in the financial sector but CIMB was able to hire him and the whole team over the years.

“It was difficult for a country that had risen from genocide. Everything was destroyed but (with our employment) it proves that the nation is growing,” he adds.

The bank has also invested in human capital development – training the staff, from tellers to senior management.

The bank spends between $40,000 and $50,000 to send its senior level management staff for intense universal banking training in Paris while mid-level management employees attend programmes at Nanyang Technological University, Singapore.

It also offers the prestigious ASEAN scholarship, and creates activities such as the ASEAN stock challenge and CIMB 3D Conquest.

“I believe the next generation would not be like the people from my time. What we do now is not for CIMB alone but for the whole industry, so when we recruit in the future, it won’t be so difficult,” he says.

Making friends out of foes

Having been in the industry for 37 years, Yin is passionate about the job as he is with building customer relationships. He recounts an incident in 1993 when he rejected a company’s application for a $2 million loan to import steel. 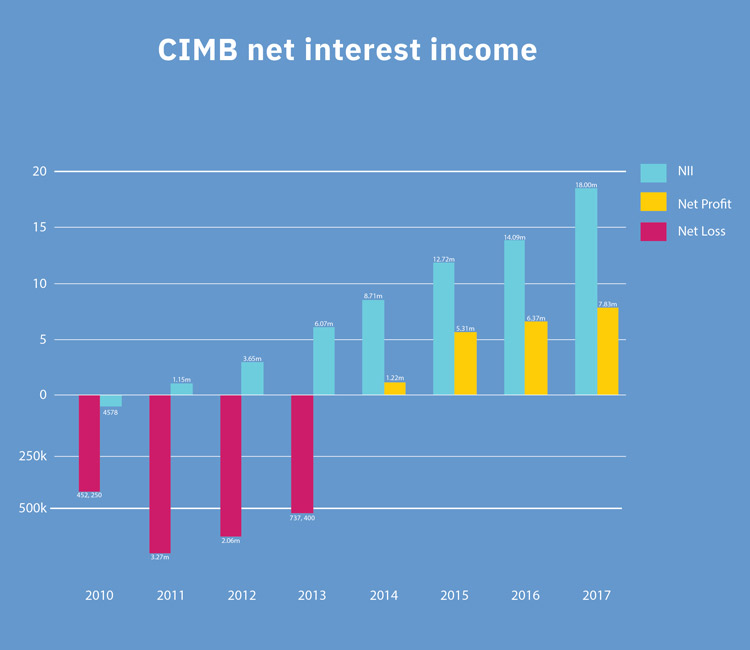 “I rejected the loan which made them angry but I explained that the trade was risky due to steel price fluctuations. Years later, we ended up as good friends.

“It is how we explain to people and I like doing that which is why I like banking as I meet different people and advice them by learning from other customers,” he says.

He does not think that foreign clients have problems with the local team as long as their needs are met, and that winning the best international bank award last year reflects its accomplishment in recent years.

“We have seen growth in foreign customers especially multinational corporations to the point that most of our deposit clients are foreigners,” he says.

From losses to strong profit

The early stages of CIMB Cambodia were challenging. In the first three financial years, the subsidiary posted net losses before reporting a neat $1.22 million net profit in 2014.

Profit before tax for FY18 is projected to be $14 million with loans expected to hit $540 million, exceeding its $472 million target for the year.

Net interest income climbed 27.69 percent to $18 million in FY17 from $14.09 million in FY16 whereas bad loans loss provision stood at 0.19 percent, making it among the best banks in the group.

The loan segment expanded at a six-year compound annual growth rate of 45.54 percent to $398.59 million in FY17 on its core business – consumer and commercial banking.

“Consumer banking is 30 percent of our loan portfolio but we remain conservative with applications. We want to keep the non-performing loan ratio low,” he says.

CIMB is building its retail segment, believing that consumer banking ensures long-term sustainability by enhancing its technology including digital and mobile banking.

“Now is the time to do it. I believe any bank that’s operating in the traditional sense will not be able to sustain,” he says.

Not time to leave

After more than three decades, Yin continues running, not ready to call it a day. CIMB has factored in succession plans including Yin’s position but he has no plans to retire yet.

“Retirement means stop working but at the moment I still love CIMB,” he adds. CapCam

Of complacency, poor governance and corruption – the elephant in Cambodia’s room

Exclusive Q&A with Vongsey Vissoth, permanent secretary of State at the Ministry of Economy and Finance

Move seen as initiative to curb fiscal impact of COVID-19