For almost a decade, the Cambodia Securities Exchange (CSX) has gradually evolved in its role as a source for local companies to find funds to grow businesses and operations.

For almost a decade, the Cambodia Securities Exchange (CSX) has gradually evolved in its role as a source for local companies to find funds to grow businesses and operations.

Since its inception in 2012, the CSX, the local bourse – a joint venture investment between the Ministry of Economy (with 55 percent of the registered capital) and the Korea Exchange (with 45 percent) – has attracted a total of eight companies to list. Those firms on the main board have garnered a combined $161million of funds from the market to expand or develop.

It is now in the news because of a rash of listings expected to be applied for this year, creating a buzz of excitement in the business world. 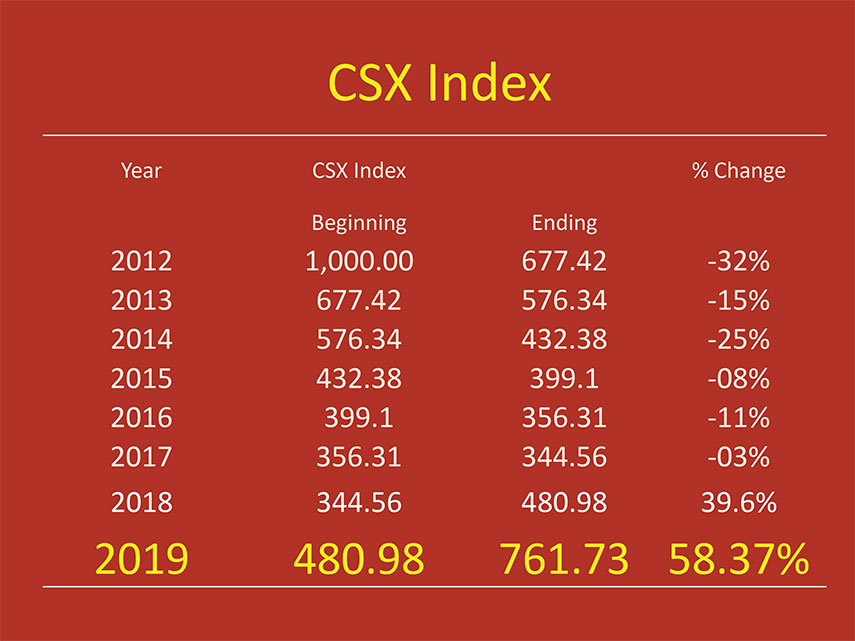 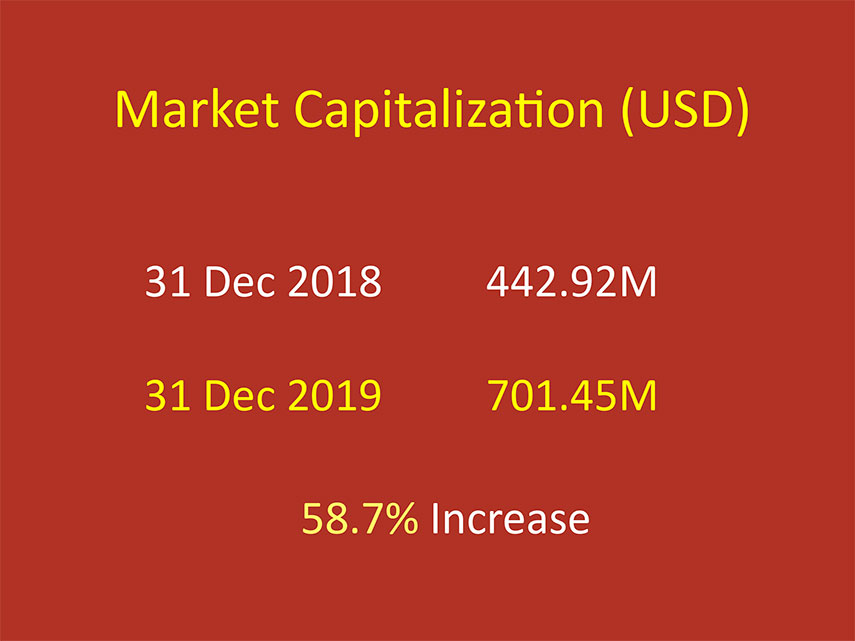 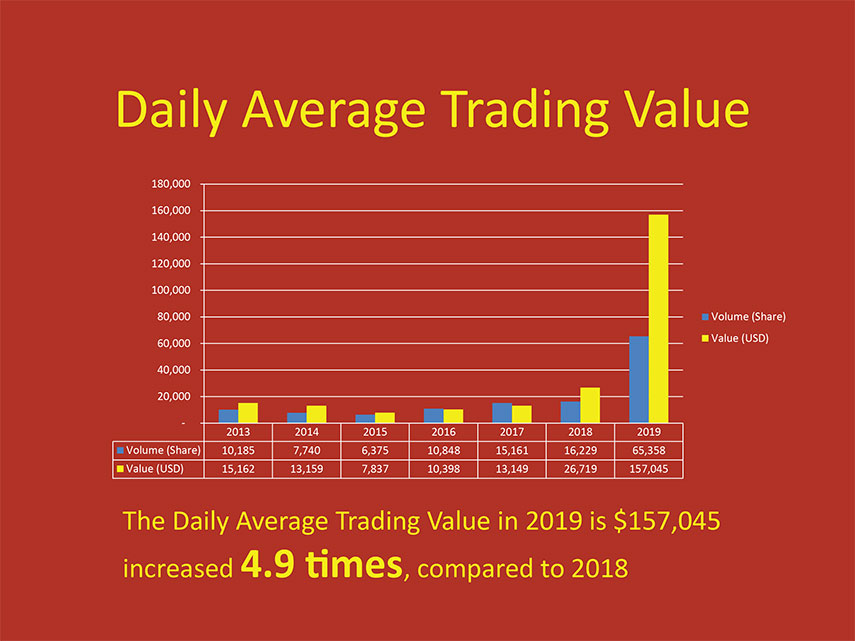 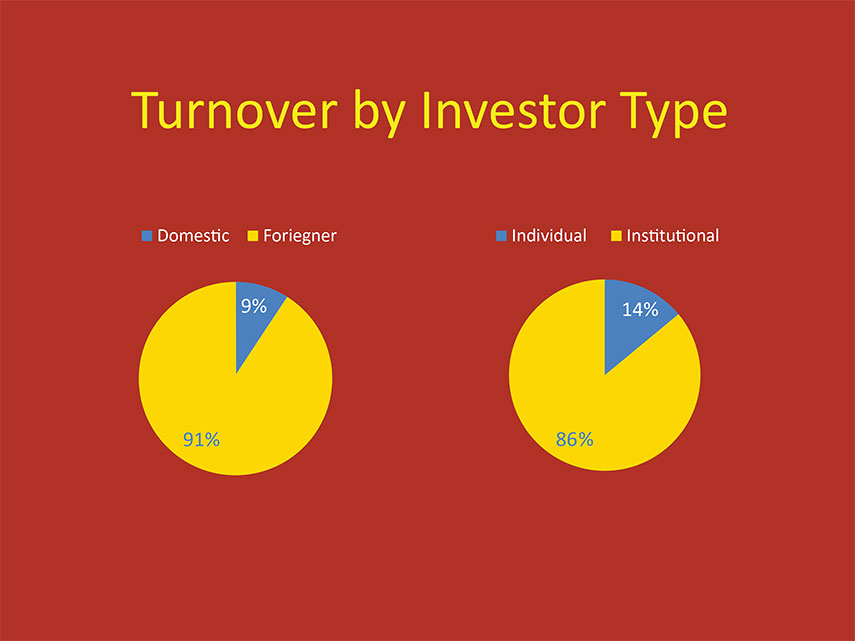 “The remarkable performance of 2019 and all the achievements pave the way for an exciting 2020,” he adds.

Cambodia Securities Exchange this year is expected to welcome more listings, both for equity and debt. Ha said CSX has approved the eligibility review application from Acleda Bank for an equity listing and South Korea-based PPCBank for a bond listing.

“The two will be expected to be listed in the first quarter of this year. This is not to mention other companies that we are working closely with and expect to be listed in 2020,” he pointed out.

This year, there will be more companies interested in the market due to a number of reasons, including the Kingdom’s economic growth, tax incentive offering listed companies within three years and competitive landscape.

Although Cambodia’s economic growth is expected to slow down in 2020, the growth rate is still considered high, suggests a favorable economic environment for investment. Such investment requires capital and listing on CSX will provide not only with the required capital but also increase competitiveness of the company.

Second, the government continues to provide a tax incentive for listed companies for another three years to support the securities market.

Third, the competitive landscape, especially in the banking sector will encourage companies to seek low-cost and long-term financing for expansion, Ha explains.

He further says that the public will turn more attention to the securities market in 2020 through the CSX continuing to market promotional activities to improve public awareness and attract more investors.

Companies listed on the local bourse are also granted a huge tax incentive from the government, with a 50 percent reduction on all corporate taxes for three years from the date of their initial public offering.

Banking institutions are joining the CSX because of offered incentives for all listed firms by providing better short-term funding for their operations, Ha says. He adds so far there are three commercial banking institutions – including, the Bank for Investment and Development of Cambodia Plc, Canadia Bank and Prince Bank Plc – that have all signed a joint statement with the CSX to provide incentives.

Ha says working with the banking sector is part of CSX policy and it encourages all companies to get listed.

“Besides the other benefits of being listed, this benefit will make them feel that they are having various funding sources with better conditions,” he stresses.

“More banks are working with us on this joint statement, but they have not yet finalised their special package. The banks are providing incentives because they find out that our stock market has a very huge potential for growth.

“Therefore, they will be the priority for our large number of listed companies for short -term funding as we are going to have more and more listed companies,” he explains.

“It will be a big stock market in the future,” Ha emphasises.

Hong Sok Hour, chief executive officer of the CSX, said the incentives show a good bond between the securities and the banking sector. “This is also providing the transparency and strong business operations of the CSX-listed companies that make listed banks a better option than those who do not get listed,” he says, adding that the CSX will seek more incentives from the government and private sector.

In order to support its expansion, Phnom Penh Commercial Bank is now mulling whether to issue corporate bonds on the Cambodia Security Exchange to raise funds. Shin Chang Moo, president of PPCBank, he hopes the bonds can be issued in the first quarter of this year. “We have a positive sign from the National Bank of Cambodia [NBC] already. The NBC is the first step allowing us to proceed with the Cambodia Securities Exchange and Cambodia Security Commission, which will decide whether or not we can issue the bonds,” he adds.

He says bond issuance will enable his bank to achieve much more because funds raised from the security market will allow the bank to expand in term of business operations. The bank boasts 211 branches in the Kingdom, where it has 46 ATMs.

Acleda Bank Plc, one of the biggest commercial banks in Cambodia, is now close to having an initial public offering IPO – initial public offering known as a stock market listing –at the local bourse. The bank has already received an official letter from the National Bank of Cambodia to proceed to the next stage of the IPO process with the Securities and Exchange Commission of Cambodia.

The bank has launched a public seminar on the company’s IPO for a second time now, aiming to raise further awareness for individual investors. The seminars provide details on the risks, challenges, benefits and other information on the offering.

“We want to focus mainly on public or individual investors, rather than institutional investors to purchase shares in the company’s upcoming initial public offering,” Acleda Bank president In Channy says.

The moves of the two financial institutions are set to change companies’ perceptions of the local bourse and encourage them to consider the capital market as a source of funding. “Other companies will follow in these banks footsteps, especially other big commercial banks in the country,” Ha says. “If they want to maintain their competitiveness in the industry, they need to find a cheaper source of funding,” he adds. Government bonds are expected to enter the local bourse within possibly the next two or three years, said Hong.

However, much work needs to be done to bring the idea into reality because the government bond issuance involves many parties such as the Ministry of Economic and Finance, the National Bank of Cambodia and the Cambodia Securities Exchange. “As to when the government will list bonds on the bourse – it would probably be available for investors in the next two to three years, he said.

Hong noted once the bond gets officially listed, it will definitely bring a huge positive impact to the Kingdom’s securities industry a whole.

He added government bonds are the most stable security and will attract big companies to invest such as insurance, banking and state-owned institutions including the National Social Security Fund. The government corporate bond is expected to provide a new avenue for companies to raise funds for capital improvements, expansions, debt refinancing or acquisitions.

Chou Vannak, deputy director general of the General Department of Financial Industry at the Finance Ministry, says government securities will serve to support economic growth, reduce reliance on foreign currencies and risks associated with currency exchange rates – and will allow the central bank to take control of the country’s monetary policy. “The bonds will play a crucial role… when Cambodia becomes a wealthier… nation,” he says.

Kingdom caught up in mastery of the Mekong

Phnom Penh is no stranger to the concept of ride-hailing. In 2016, its first homegrown ride-hailing service by Exnet hit the streets. Since then, the city received seven other players.

Skilled labour shortage forces the recruitment of foreign workers, a move not favoured by locals but one that is likely good for the nation