The Lehman crisis that triggered the 2008 financial crisis left many governments indebted but private institutions replete with cash.

Multi-suite financial service provider PhillipCapital Pte Ltd, among those corporations with accumulated cash, is one of them.

As a group, it does not borrow because investment opportunities are limited, seeing that business models these days are software-based. “You don’t need billions for that, only a few clever guys. That is why there is a lot of cash, and why interest rates will remain low. I call it idle cash,” says founder and executive chairman Lim Hua Hin.

As a result, there is a big shift towards assets management, be it commodities or real estate. One of the pioneers in this sector in Asia, PhillipCapital is also looking to increase its investment in commodity infrastructure, tourism and real estate in Asia. It possesses shareholders’ funds in excess of $1.5 billion with over one million clients worldwide. Its assets under management amount to more than $35 billion.

“People are looking for yield in many countries. Being a private equity firm, we are still investing but our main emphasis is still Asia. Currently, we have real estate funds in Japan, and are developing affordable housing in Indonesia via a joint venture with a Japanese partner,” he tells Capital Cambodia.

The group, with presence in 15 countries including China, France, Hong Kong, India, United Kingdom, US, Malaysia and Thailand, has invested a total of $500 million over the last 20 years. The returns or yield has been very mixed, though.

Lim, 73, owner of one of Singapore’s largest brokerage firm Phillip Securities Pte Ltd, a unit under PhillipCapital, which is controlled by him and his family, cites an example over how he came to creating a new business model for hearing aids. 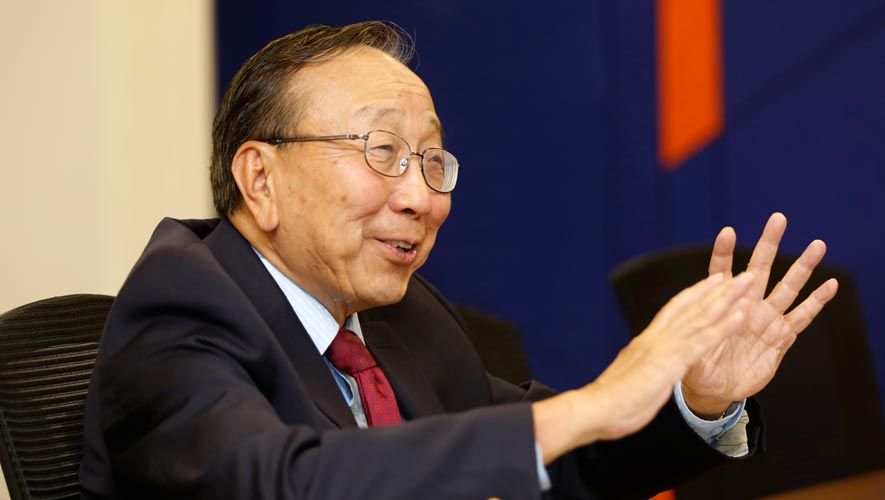 “A hearing aid could easily cost S$4,000 in Singapore but my partner bought one for S$14,000. The doctor ripped him off. So we decided to create a new business model where it is based on the ‘do-it-yourself’ principle. Consumers just need to log in to the Internet, switch on the speakers, tap and test their own hearing. After that, they just need to send the prescription to the company and pay S$400 for a pair,” he explains.

Lim says private equity is not fixed but the group has its priorities.

“Now we are looking at commodities, infrastructure for commodity such as warehouses in Indonesia to store our coffee because we trade coffee. We buy coffee from Vietnam and Sumatera (Indonesia) and sell to Jawa and the rest of Asia. We also trade rubber,” he adds.

He finds that technology companies, which is a big “flourishing” sector, is good but would rather focus on developing its own prototypes through its incubation centre in Singapore.

“It is part of our own strategic development but we will always look for partners to co-invest in bigger things as we go along,” he adds.

In fact, the group is looking for private equity investments in Cambodia as long as it “makes money”.

The group, which is among the largest financial service provider in the world, is also the brain behind Phillip Online Electronic Mart System (POEMS), a suite of trading platforms that caters to client’s needs, regardless of lifestyle or trading habits.

Moving to the heartland

In Cambodia, Phillip Capital recently merged with Kredit Microfinance Institution Plc, where its value of investment in terms of equity amounts to $110 million to $150 million.The deal is expected to conclude on August 1, this year.

Lim sees synergy in the merger for which a network effect is created throughout the country. Phillip Bank, which has six branches, is based in the capital while Kredit MFI has 90 outlets all over the country.

“We would very much like to be a Cambodian bank that serves Cambodians. So, it is better to move into the heartland of the country than remain a city bank,” he adds.

“To me, Cambodia is in the midst of Indochina, and Indochina is in the midst of Asia which is one of the fastest growing region in the world. Up to 400 years ago, this region contributed 80 percent to the world’s gross domestic product. Today, it is around 30 percent. I believe by 2050, Asia might reclaim some of its birthright reaching 50 percent with Cambodia growing at seven percent. I don’t think we are far behind, we are long-term players. We just prefer to ride with the times, to be at the right place at the right time,” he says.

As a group, PhillipCapital is only too familiar with financial technology. In the last few years, it has invested over $20 million in fintech including its collaboration with Singapore state investment arm Temasek Holdings Private Ltd to invest in China. It is essentially a financial services company with information technology capability, having developed its own blockchain.

“If you talk about cryptocurrency, we are in a position to do it but due to its reputation and risks, we are not moved to doing it. It is not something we would go ahead but we could use it as a token rather than a currency,” Lim says.

What’s in it for Cambodia?

According to The Edge Singapore, PhillipCapital started as a capital markets group in 1975 when Lim acquired a bankrupt broking firm using his personal savings and borrowings from his father and a bank. It moved into fund management, private equities, investment, and insurance.

The group currently has custody of $36 billion worth of customers’ assets in London, US and Australia.

In 2014, PhillipCapital acquired the Cambodian banking arm of Malaysia-based HwangDBS for $40 million, and rebranded it as Phillip Bank Plc.

The acquisition deepened PhillipCapital’s presence in Cambodia, allowing it to tap into the synergies between the commercial bank and its existing microfinance operations in the country.

Phillip Bank is the group’s only commercial bank with MFI experience. It also incorporated life and general insurance into its Cambodian portfolio.

“We want to introduce more financial products from investment to protection. It is up to what interests our clients,” Lim says.

However, he contends that Cambodian capital market is not ready for financial services as the regulatory system is not there yet but it hopes to be in a position to help facilitate the development, to modernise it into the 21st century.

Without Trump, would the war continue?

Although emerging economies are likely to enjoy the spillover effect from the protracted trade war, overall global economy would see lower growth in the next 10 years.

“I won’t be surprised if some parts of the world would end up with negative interest rate. That would not be good for people who save money. From that angle, I would say that the world is going through a period where we are facing low growth since before the industrial revolution in the 1800s,” Lim says. If the interest rate lowers, what the world is experiencing is also asset inflation but not core inflation.

But would it make a difference to the trade war if US President Donald Trump was not re-elected in the presidential election next year?

“I don’t think there is a difference, only because the imbalance of surplus on one side of the world and deficit on the other would not be able to carry on,” he opines.

Lim believes that the trade war is a competition on data, a case of who will emerge as the winner in the end.

“It is up to you to take the bet. If I were China, I would focus on Asia and Africa. With the rise of these continents, one would have no choice but to join because it is a numbers game. Asia and Africa have the numbers but not the wealth yet, and data is all about the numbers,” says.